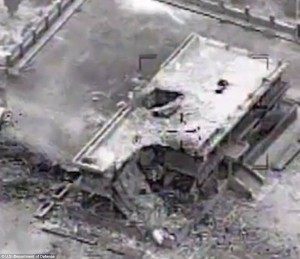 Britain could launch airstrikes against Isil in Syria the Defence Secretary warned today as he hit out against the “illogicality” of just targeting the terrorist group in Iraq.

Michael Fallon urged MPs to think “very carefully” about how to deal with Isil, which he said does not respect borders between countries.

Britain is currently limiting its airstrikes to Isil targets in Iraq, after plans to extend the bombing campaign into Syria were defeated by Parliament in 2013.

Mr Fallon made the comments on the BBC Radio 4’s World at One show at lunchtime, and this afternoon the Prime Minister’s Official Spokesperson backed his words.

The Defence Secretary told the BBC: “We have always been clear that Isil has to be defeated in both Syria and Iraq. We have plenty to do in Iraq; each member of the coalition is doing different things. But Isil is organised, and directed, and administered from Syria. There is an illogicality about not being able to do it.

“Now, there were reservations in the last Parliament about doing anything in Syria that would prop-up the Assad regime, which, of course, partly caused this problem in the first place. But, the Americans and others are striking in Syria – that of course in turn means we could play our part in Iraq.”

Mr Fallon added: “It is a new Parliament and I think Members of Parliament will want to think very carefully about how we best deal with Isil and the illogicality of Isil not respecting the borderlines, they don’t differentiate between Syria and Iraq, they are establishing this evil caliphate across both countries.

“There is no legal bar to us operating in Syria, but we don’t have the parliamentary approval for it. We don’t need it at the moment because we are playing our part in the campaign, and indeed what we do in Iraq actually frees up the United States aircraft to attack in Syria.”

He said if the Tunisian terror attack that saw at least 27 Britons lose their lives could be linked back to Syria the UK would have to “reflect” how it responds.

“Well Isil has to be defeated in both countries, and Isil has been directed in all its evil in Iraq is all being directed by its headquarters in Syria. We don’t yet know enough about this attack in Tunisia, a lot of work has got to be done to establish the network behind this particular attack. But, again if we can link it back, it does link directly back to Isil in Syria, then, you know, we will have to reflect with the rest of the coalition how best we deal with that.

Asked about Mr Fallon’s remarks, the Prime Minister’s official spokeswoman made clear that he was acting as a Government spokesman.

Pointing to David Cameron’s own speech on Monday, she said: “The Prime Minister has been been clear on the need for us to be crushing ISIL in both Iraq and Syria. I would say that in the sense of the role we are playing alongside others.

“Clearly ISIL is seeking to find areas from which it can operate and seeking to threaten people here in Britain. And as part of what the PM was talking about in terms of having a ‘full spectrum response’, that clearly means not just focusing on one are but a whole range of areas.

“Most recently 27 or more British citizens have been killed in a terrorist attack and the investigation suggests it was ISIL and therefore the Prime Minister is [asking] are we doing enough and in the right areas.