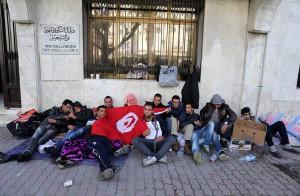 A study by the Tunisian Forum for Economic and Social Rights (FTDES) revealed that “45% of Tunisian youth searching for work are ready to emigrate, even illegally”. The study, titled “Youth and illegal migration in Tunisia: a field study of stereotypes, practices and expectations”, was conducted in cooperation with the Rosa Luxemburg Stiftung Foundation (FLS) on a sample of 1,200 young people in Tunisia.

The study, conducted by 11 experts, including 9 university professors, aimed to analyse the various aspects of clandestine migration of Tunisian youth before and after the 2011 revolution and to identify the reasons for this choice, said Romdhane Ben Amor, FTDES media director.

He emphasized the failure of the Tunisian development model, as nearly 25,000 Tunisian youth left the country illegally following the events of the revolution.

He said those figures have continuously increased after 2011, along with a rise in the number of missing persons.

“We believed that the approaches adopted by successive governments in managing the issue of illegal migration would be able to provide alternative solutions, apart from the agreements signed with the European Union, but no improvement has been observed in the treatment of the economic and social situation of regions affected by this phenomenon,” he said.

The study was carried out in December 2015 on a sample of 1,200 young people in 6 governorates (Tunis, El Kef, Gafsa, Kasserine, Medenine, Mahdia), 53.3% of whom were men and 46.7% women. Half of the respondents said they interrupted their studies in secondary school, 27.6% have a university degree, and 17% have a secondary school diploma. In the sample, 24% are unemployed and 70% are job seekers.

Of the respondents, 21% said they are ready to emigrate – even illegally – if the opportunity arises, and 15% said they are in contact with human smugglers, those who organise Mediterranean crossings.