You are here: Home / Mediterranean / Tunisian soldiers killed in clashes with jihadists near Algerian border 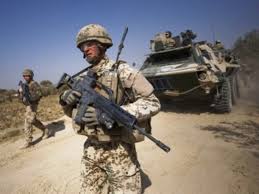 Islamist militants killed two Tunisian soldiers who were seeking to free a man kidnapped on Monday in a mountainous area near the border with Algeria, an army spokesman said.

“During a search operation, jihadists hiding out on Mount Sammama opened fire on our soldiers. Two soldiers fell as martyrs and four were wounded,” ministry spokesman Belhassan Ouselati said.

Tunisia’s army has been carrying out operations in the area after two major attacks this year were claimed by the Islamic State group.

“During a search operation, jihadists hiding out on Mount Sammama opened fire on our soldiers.

Two soldiers fell as martyrs and four were wounded,” ministry spokesman Belhassan Ouselati said without identifying which group might be responsible.

He said the army operation was launched after a shepherd was kidnapped on Sunday near Mount Sammama in the Kasserine region, located next to the main jihadist hideout of Mount Chaambi.

Okba Ibn Nafi, a local Islamist group linked to Al Qaeda, said on Twitter it had executed the kidnapped man and said he was a spy for the police.

Tunisia has since its 2011 revolution faced an upsurge in jihadist violence that has cost the lives of several dozen soldiers and police, with most attacks claimed by Al-Qaeda’s North African branch.

But the bloodiest attacks, for which the IS group has claimed responsibility, killed a total of 59 foreign tourists, targeting the national Bardo museum in Tunis in March and a Sousse beach resort in June.

According to the government, more than 3,000 Tunisians have left to fight for Islamist militant groups in Syria, Iraq and Libya. Some of them have threatened to return home and carry out attacks on Tunisian soil.