You are here: Home / Mediterranean / Tunisian Minister: 1,000 militants from Tunisia fighting with ISIL in Libya
Tunisia’s defense minister estimated that some 1,000 militants of Tunis Origins are fighting for the ISIL terror group in Libya, branding them a threat to their home nation 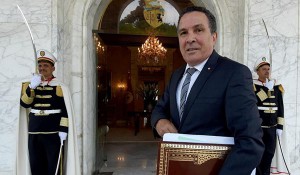 On the sidelines of a security conference in Paris, Farhat Horchani told journalists that reports of 2,000-3,000 Tunisian militants in Libya are exaggerated, saying “it’s on the order of 1,000”, Alaraby reported.

For now the Tunisian fighters have not returned home in large numbers, but Horchani said “we must remain vigilant” as they remain a “threat”, noting that some of them are dual French nationals.

He went on to say there is no regional plan to deal with foreign fighters in Libya, noting: “Countries handle the issue day-by-day”.

“The war against terrorism is an all encompassing one. If we confront terrorism only on the security or military fronts, we lose the war,” Horchani added.

“We must instill in young people that Islam is not this… If not, within a couple years we will have a monster more dangerous than ISIL,” he said.

“The capture of the coastal Libyan city of Sirte by ISIL last year sparked fears the extremists would use it as a springboard for attacks on Europe.

The ISIL terrorists took advantage of the chaos in oil-rich Libya following the 2011 uprising, seizing the city in June 2015.

But forces loyal to Libya’s Government of National Accord (GNA), backed by US airstrikes, have recaptured nearly all of Sirte, the militants’ main stronghold in North Africa.

Horchani said he believed that among the fighters flushed this month from Sirte, “it is very probably that some went towards the South, and some will go towards the West”.