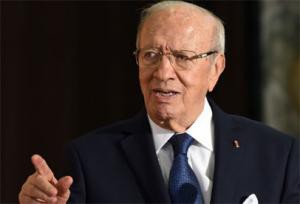 He will meet US President Barack Obama on Thursday after talks with Secretary of State John Kerry the day before.

Washington has already said it will double its security assistance budget for Tunisia, cradle of the Arab Spring uprisings.

Since its January 2011 revolution, followed by democratic elections which have earned international praise, Tunisia has seen jihadist violence that has killed dozens of members of the security forces, mostly near its border with Algeria.

In March, a massacre claimed by the Islamic State group at the National Bardo Museum in Tunis left 21 foreign tourists and a policeman dead.

The White House has said its invitation to Essebsi was to underline support for Tunisia following its “historic” democratic elections last year.

While in Washington, Essebsi will also meet Vice President Joe Biden and the secretaries of state for defence and commerce, presidency spokesman Moez Sinaoui said in Tunis.

“What we expect from this visit is a strengthening of Tunisia’s military and security capabilities in both equipment and training,” Sinaoui told reporters on Monday.

In an early April visit to Tunis, US Deputy Secretary of State Antony Blinken announced that the United States would provide “additional assistance and training to Tunisia’s security forces”.

“Our goal is to strengthen their capability to defeat those who threaten the nation’s freedom and integrity,” he said.

“To that end President Obama is seeking to double our security assistance budget for Tunisia next year,” Blinken said.

He said the aid would go towards boosting the military’s control of the borders of Tunisia, which has been battling jihadists since 2012 on its frontier with Algeria and arms smuggling from Libya.

The aid would also be used “to deal with the terrorism challenge presented here in Tunisia”, Blinken added.

Last week, Washington announced the delivery of 52 Humvee military vehicles and a patrol boat, the first of four to be supplied in the coming year.

“It is natural that the fight against terrorism will be one of the main topics” of discussion in Essebsi’s talks with US officials, Sinaoui said, also citing the Libyan issue.

On Monday, a foreign ministry official said Tunisia was negotiating for the release of 172 nationals being held by the Fajr Libya (Libya Dawn) militia as bargaining chips for one of its commanders detained in Tunis.

The Islamic State group is also seeking to expand its foothold in Libya, feeding on the lawlessness that has gripped the country since the 2011 NATO-backed uprising that toppled long-time leader Moamer Kadhafi.

Essebsi will also take Finance Minister Slim Chaker with him to Washington after Obama in March urged Tunisia to undertake reforms to relaunch the economy and sustain the democratic progress made since 2011.

In a video message to a conference devoted to investment in North Africa, Obama said democratic and economic progress in Tunisia go “hand in hand”.

Economic reforms announced repeatedly by Tunisian governments since 2011 have not been implemented, as the North African nation grappled with a succession of political crises and social conflict.