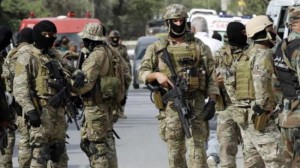 Jihadists have launched a string of attacks on military checkpoints and patrols, and Islamic State last year claimed responsibility for a suicide bombing in Tunis and gun attacks targeting foreign tourists at a museum and a beach hotel.

Tunisia has been held up as a model for democratic transition since the 2011 uprising against Zine El-Abidine Ben Ali. But the attacks have battered its economy, particularly its tourist industry.