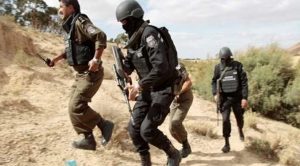 The operation launched at dawn was still underway, the ministry said in a statement, adding authorities were working to verify the nationalities and affiliation of the “five terrorists” killed.

The operation targeted a jihadist base on Mount Chaambi, near the border with Algeria.

Tunisia has seen a surge in radical Islam since veteran president Zine El Abidine Ben Ali was ousted in the country’s 2011 revolution.

The army has been battling armed groups since 2012 in the country’s central mountains.

They include fighters from Jund al-Khalifa, or “Soldiers of the Caliphate”, linked to the Islamic State group, and jihadists from Okba Ibn Nafaa, a local branch of Al-Qaeda in the Islamic Maghreb (AQIM).

One of the bloodiest operations took place in 2014 when assailants killed 15 soldiers on the Mount Chaambi, the first of a series of deadly attacks that have seen dozens of security forces killed.

In February, the Islamic State group claimed responsibility for the killing of four soldiers in three blasts near Mount Mghila, adjacent to Mount Chaambi, and said a “spy” was beheaded.

In April, a suspected jihadist blew herself as security forces closed in on the remote Selloum area of the central Kasserine mountains, also near Algeria’s border.