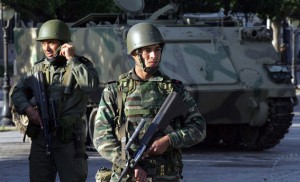 A corporal at the National Army was killed in clashes between army units and a terrorist group in Jebel Salloum, in the governorate of Kasserine, a military source said to TAP correspondent in the region, adding that these clashes are still going on.

Important military reinforcement was deployed in the region, the correspondent reported.

Joined by phone, spokesman for the Defence Ministry lieutenant-colonel Belhassen Oueslati confirmed that clashes are still on without providing further clarification pending the end of the operation.