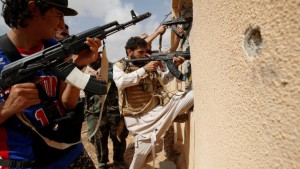 Tunisia’s defence minister has warned that North African countries need to be doing more to stop Islamic State fighters fleeing Libya from returning home and causing trouble. This comes as UN-backed Libyan forces work to take back the IS stronghold of Sirte, where the jihadists have been almost entirely pushed out.

An estimated 1,000 Tunisians are fighting for the Islamic State group in Libya, and the danger of these fighters going home, causing further threats to their country is actually very real, yet not exactly news.

There has been a lot of back and forth of IS fighters from Libya to Tunisia – the reason why there is an ‘almost’ wall being built between the two countries.

However, the number of them returning home could overwhelm the security forces in Tunisia.

“We’ve seen in the past just how a handful of jihadists coming from Libya into Tunisia have really carried out attacks that have had a huge impact on the Tunisian economy as well,” Olivier Guitta, the Director of GlobalStrat, an International Security and Geopolitical Risk Firm told RFI.

“There was just one fighter that was trained in Libya when he killed 38 tourists in Sousse – that, in a way, enabled to cripple the tourism industry, so the threat is very real, and on top of it, Tunisian security services do not have the wherewithal of whethering this kind of threat in such a large scale.”

On the other hand, the fighters might choose to go to other strongholds, before returning to Tunisia.

“It’s easier for them first of all to move South of Sirte, and try to go to other oasis or cities in the south of Libya, that are much more lawless than western Libya that they would have to cross before going to Tunisia,” Youssef Cherif, a political analyst based in Tunis, told RFI.

“Some of them will actually try to keep on fighting inside Libya, others will try to join the other strongholds of the organisation, of the Islamic State armed group, or even smaller extremists groups – this is southern Libya, or in countries bordering Libya in the South, like Chad, like Mali, although it’s not exactly bordering Libya but it’s a place where they often go and operate… so they do a lot of other possibilities before going to Tunisia.”

Political differences appear to be standing in the way of broader regional – and international – cooperation.

Several countries disagree on how to tackle the crisis. Youssef Cherif said their priorities are not the same, and that’s also why there’s so little cooperation.

Leaders of these countries often have different allies around the world, they have different opinions towards western countries, western powers, and they do not agree on who should be the partner on the international stage, to counter IS, and similar organisations, Cherif told RFI.

“And of course you have the internal problems of these countries, and that’s actually pushing them towards more isolationism – that’s why you have for example Algeria building a fence with Tunisia, at least with the Southern part of Tunisia, you have Tunisia building a fence with Libya… So the problem is the concept of isolationism rather than cooperation with the neighbours – and that’s what this latest conference in Paris tried to put forward – more cooperation and more trust.”

Collective efforts are needed, and, if it’s not already too late, something needs to be set in motion as soon as possible according to analysts.

“We need to make sure first of all that there’s political will from the different leaders, in order to put together a plan and make sure it’s implemented on the ground,” Mohamed Eljarh, a political scientist at the Atlantic Council thinktank, based in Tunisia, told RFI.

But more importantly, he said there was to be political will.

“It is something that has been missing and it is only when these countries feel the threat of terrorism that they will start talking about some regional efforts to try and put an end, or try and face up the threat of jihadist groups such as IS.”

The international community has already helped when it comes to training the security forces in Tunisia, but scaling up now is going to be a long haul and will not be done overnight.