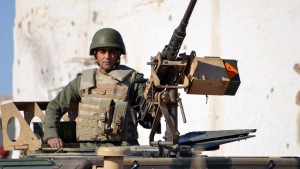 The man’s body was found in a house early on Monday after heavy clashes in the Sayah area near the Libyan border, a security source said.

An interior ministry spokesman confirmed that the man was killed, without providing further details.

Ten members of the security forces and one civilian were wounded in the clashes, a Ben Guerdane hospital official said. Three are still in hospital.

The army and security forces have deployed around Ben Guerdane since jihadists launched a dawn assault on security installations in the area on March 7, killing 13 members of the security forces and seven civilians.

The security source said the Monday raid came as part of an operation launched Sunday to target the alleged killer of an official in the security forces during the March 7 assault.

There was no claim of responsibility for the March 7 attacks, but authorities blamed them on the Islamic State group.

Tunisia has failed to curb a rise in extremism since the 2011 revolution that ousted longtime dictator Zine El Abidine Ben Ali.

Last year, ISIS claimed attacks on the Bardo museum in Tunis and a popular resort hotel, killing 59 tourists in total, and the suicide bombing of a bus that killed 12 presidential guards.

Thousands of Tunisians have signed up to fight abroad with extremist groups.

Tunisia is on Tuesday expected to host a meeting for countries neighbouring Libya, where ISIS has taken advantage of the turmoil after the 2011 revolution to extend its influence.