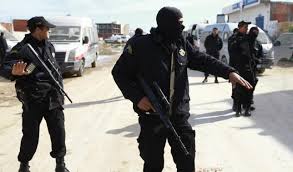 Tunisian police have broken up a cell recruiting fighters for Islamic State in Libya and Syria, authorities said on Wednesday.

Tunisia declared a state of emergency after a suicide bombing killed 12 presidential guards on a bus in the capital Tunis in November. That followed major gun attacks targeting foreign tourists at a Tunis museum and a beach hotel, both of which were claimed by Islamic State.

“Our special forces counter-terrorism unit dismantled a cell which included nine extremists in Bizerte who were actively recruiting young people to send them into areas of trouble,” the interior ministry said.

It said those arrested had admitted recruiting for Islamic State in Libya and Syria.

Tunisia, mostly a haven of stability since its 2011 revolt against autocrat Zine Abidine Ben Ali, is increasingly being challenged by Islamist militants, who have hit army patrols and checkpoints as well as carrying out major attacks.

Several thousand Tunisians are fighting with Islamic State and other groups in Iraq and Syria. The gunmen in the Sousse and Bardo Museum attacks all trained at militant camps in Libya before returning to their home country.