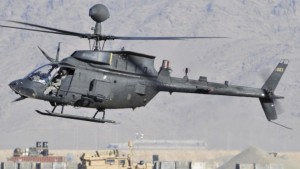 The image posted on the forcesdz.com forum for the Algerian, Tunisian, and wider Maghreb armed forces on 20 August purportedly shows the first of 24 Kiowa Warrior observation and light attack helicopters for the Tunisian Air Force at an undisclosed airfield in the country. One of 12 Black Hawk utility and transport helicopters due to be delivered can be seen in the background.

The Tunisian Air Force has four main helicopter operating bases at Bizerte-Sidi Ahmed near the country’s northern Mediterranean coast, Bizerte-La Karouba on the northern coast; Sfax-El Maou on the eastern seaboard, and Gafsa in the interior, and it is likely that the image was taken at one of these locations.

Requests for confirmation of the delivery from the Tunisian Ministry of National Defence, the US Army, and the US Embassy in Tunisia had not been answered by the time IHS Jane’s went to press.

The order of 24 Kiowa Warrior helicopters for Tunisia was approved by the US government in early May. At that time, the US Defense Security Cooperation Agency (DSCA) said that the USD100.8 million deal would include Excess Defense Articles (EDA) helicopters, as well as weapon systems, defensive aids, night-vision goggles (NVGs), communications and navigation systems, training, and support.

The announcement of the proposed sale of 24 Kiowa Warriors to Tunisia came on the back of a US Department of Defense (DoD) contract for four ‘modified’ UH-60M Black Hawk utility helicopters announced on 30 June 2015. All 12 Black Hawks are scheduled to be in-country by the end of June 2019.