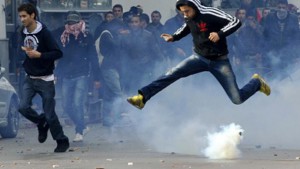 As protests over youth unemployment spread in Tunisia, the country’s President Beji Caid Essebsi has warned that unrest could be exploited by the extremist group ISIL, already present in neighbouring Libya.

But there was also a message of hope, with a presidential vow that ‘we will get out of this ordeal’ and the prospect of more cash to create a brighter future.

Speaking on television in his first public comments after days of unrest, Essebsi said: “I know that the state and the government are able to find the appropriate funds, even if we have to take it from somewhere else to allocate it to this issue, because this is our responsibility.”

On ISIL, he warned of the risk that the group in Libya, “finds that the moment is opportune to infiltrate into Tunisia”.

The protests began in the impoverished central city of Kasserine after the death of a young man who had been refused a job in the public sector.They have since spread – unleashing violence that has resulted in the declaration of an overnight curfew.

“I thought the revolution would give us hope to find work with dignity,” said Haamza Hizi, 28, an unemployed man in Kasserine.

“I never thought I would repeat the same demands as five years ago. The old regime has robbed our dreams.”

President Essebsi on Wednesday announced that the government would seek to employ more than 6,000 youths in Kasserine and start construction and development projects. On Thursday, thousands came out to register at the governor’s office.

Five years ago, a suicide protest by a young, desperate Tunisian triggered revolt across the Arab world.