You are here: Home / Mediterranean / Tunisia preparing for military action in Libya 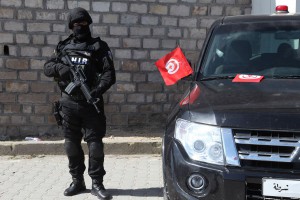 A former Brigadier-General in the Tunisian Armed Forces and Head of the Tunisian Centre for Comprehensive Security Studies Mokhtar Ben Nasr has said that military intervention in Libya is a matter of time and Tunisia must prepare for all possibilities.

In remarks published by Tunis Afrique Presse, Ben Nasr said that the Tunisian army and security units are fully prepared and have increased joint patrols and coordination between the various units, which will make Tunisia safer in the event of military action in Libya.

He added that mock operations conducted in hospitals in the south of Tunisia are part of preparations ahead of possible military action in Libya.

Ben Nasr also warned that the deterioration of the situation in Libya could have a direct impact on security and stability in Tunisia. He urged utmost vigilance insofar as terrorists could exploit the fragile situation to conduct terrorist attacks in the country.

President Beji Caid Essebsi on Thursday warned the international community against military intervention in Libya and called on them to take into account the neighbouring countries.