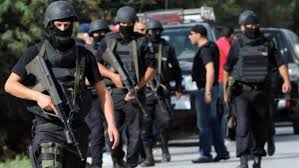 Tunisian police have clashed with Islamist gunmen in a remote mountainous area in the southern region of Gabes, killing at least two miliants, the interior ministry said on Monday.

“During counter-terrorism operations, police exchanged fire with a group of terrorists. First indications are that two terrorists were killed and a policeman injured,” the ministry said in a statement.

Tunisia has escaped major upheaval and violence suffered by other countries who ousted longstanding leaders in the 2011 Arab Spring revolts. It has been held up as a model for democratic transition since the uprising against Zine El-Abidine Ben Ali.

But its young democracy and economy were tested by three major attacks last year, including Islamic State shootings targeting foreigners at a Sousse beach hotel and a Tunis museum, and also a suicide bombing in the capital.