You are here: Home / Mediterranean / Tunisia: Police bust cell that has pledged allegiance to Islamic State 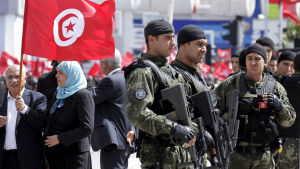 Specialized anti-terrorism police units have dismantled a takfiri cell of five (17 to 21-year-olds), the Tunisian ministry of interior announced according to aawsat.com.

A ministry statement said the members of the network were intending to join Jund al-Khilafah, a local ISIS affiliate.

According to sources, some of the cell’s members in Kasserine (western Tunisia) had insisted to join Jund al-Khilafah in the Mghila mountains for being influenced by ISIS’ ideology.

The remaining members of the network, who were busted in Ibn Khouldoun and Omrane near the capital, wanted to join the terrorist members in Kasserine and then to collectively join Jund al-Khilafah.

According to centers specialized in studying terrorist groups, there are between 300 and 400 sleeper terrorist cells in Tunisia.