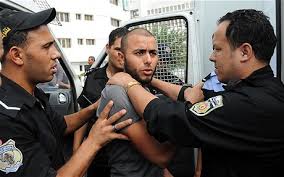 Police in Tunisia have arrested 12 members of the Daesh group and seized bomb making materials since a suicide attack last month, the interior ministry said according to jordantimes.com.

The authorities have also “dismantled four takfiri [Sunni extremist] sleeper cells in several parts of Tunisia”, the ministry said in a statement.

The announcement follows an attack by 30-year-old female suicide bomber Mna Guebla on October 29 that wounded 26 people on the capital’s busy upmarket Avenue Habib Gourguiba, in the first militant attack in the capital since November 2015.

The attack went unclaimed but the Tunisian authorities said the suicide bomber had sworn allegiance to Daesh.

Police have arrested 12 people suspected of supporting Daesh, an interior ministry spokesman told AFP, without specifying where and when the arrests were made, nor the suspects’ links to the perpetrator of October’s attack in Tunis.

The suicide bomber had contact with Daesh officials “inside and outside the country, and liaised with them over the Internet”, the ministry said in its statement.

The Daesh officials had taught the bomber how to make explosive devices and she built the one used in the attack, the statement said.

A laboratory producing explosives and electronic components has also been uncovered in a Tunis suburb, the ministry said.

The four dismantled cells are suspected of having been in contact “with terrorist officials entrenched in the Tunisian mountains to organise a series of attacks… aimed at sensitive targets with weapons, a car, poison or remote explosives”, the statement said.

Investigators confiscated “a very large quantity of explosive and chemical products, along with a drone equipped for remote bombings”, the statement added, without specifying where the haul was found.

In a separate statement late on Thursday, the interior ministry said a police patrol had been targeted by an armed group in the middle of Kasserine, a marginalised city in western Tunisia.

A passerby was shot and wounded, the ministry said.

The attack was claimed by Daesh in a statement on its Telegram account, saying its fighters had opened fire on the patrol.

In November 2015, a suicide bombing killed 12 security agents on a bus used by the presidential guard, in an attack claimed by Daesh

In June 2015, a student went on a shooting rampage in the coastal resort of Sousse and killed 38 people, including 30 Britons and an attack in March that year on the Bardo National Museum in Tunis left 22 people dead, all but one of them foreign tourists.