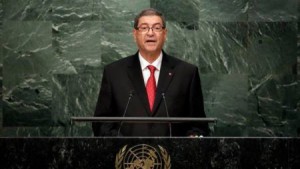 The announcement was given, Tuesday in New York in remarks of President Beji Caid Essebsi delivered on his behalf by Prime Minister Habib Essid.

“Presently Tunisia examines the fields of contribution to the international coalition. We will see to it to participate actively, wherever resources were available, in some fields,” writes the President of the Republic in his remarks.

The international coalition constitutes “the appropriate framework for joint action and collective commitment against violent extremism”, he said.

“Tunisia accepts to be a leader country in the initiative providing for the international mechanism of edification of potentialities in the fight against terrorism and violent extremism,” Caid Essebsi underlined.  The President of the Republic reiterated Tunisia’s commitment to provide an efficient contribution for the achievement of the objectives of this initiative as part of implementing recommendations of the Group of Seven.

It needs a real international political will and rapid action as part of an inclusive and participatory approach, he said.  A call was sent to the international community to bolster the security and military services of the countries in war against terrorism and to intensify co-ordination and exchange of intelligence expertise and experiences between all the countries. The call also includes boosting co-operation in the field of border security, justice and fight against money laundering and different other fields related to the activities of searching terrorists.  Tunisia endeavours presently, in co-ordination with the committee of fight against terrorism stemming from the Security Council, for the finalisation of a comprehensive national strategy against terrorism based on prevention, protection, observation and response.  This strategy includes security, social, economic, intellectual, cultural, media, educational and religious dimensions to prevent and fight against terrorism.

A particular interest will be granted to the issue of foreign terrorist fighters through banning travel for some doubtful categories towards the conflict zones and keeping an eye on fighters returning to Tunisia, further indicated Caid Essebsi.

He reminded, in this respect, Tunisia’s membership in the international mechanism against terrorism as well as the mobilisation of means and potentialities for the fight against this phenomenon. He cites the adoption of a new law against terrorism and money laundering, the establishment of a judiciary pole and another for security as well as the creation of a security and military intelligence agency.