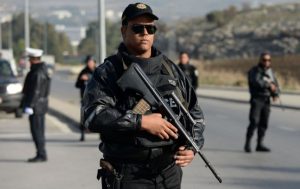 “The terrorist threat persists in Tunisia, especially in border areas, which requires constant watch and action to thwart any attempt or even plan targeting the security and stability of the country,” Interior Minister Hédi Majdoub said according to tap.info.tn.

Majdoub, who was conducting an inspection visit this morning to the security units in Jendouba governorate, told TAP that his department still receives reports of terrorist groups holed up on the heights near the Tunisian-Algerian border and elsewhere.

In this regard, he highlighted the high level of vigilance and promptness observed by the security apparatus in dealing with any possible terrorist threat.

Besides, the Interior Minister considers “normal” to see himself and his department subjected to the pressures exerted by certain political parties and other components of the civil society.

What is all the more normal, he added, is “to be permanently with the security forces in all circumstances”.

In this regard, he assured that he would not pay any attention to political tensions or statements about his probable separation from the next government team but rather to focus on the security institution as well as the efforts and programmes to be implemented to preserve the security and stability of the country in this delicate phase.

During his visit, Majdoub inaugurated a new border post of the National Guard in the region of “Barakat” (delegation Ghar Dima).