You are here: Home / Mediterranean / Tunisia gunman went to Libya three months ago for jihadi training 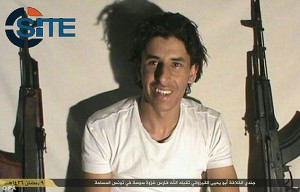 The gunman who slaughtered 38 holidaymakers on the beach in Tunisia is believed to have travelled to an ISIS terror training camp in Libya, it emerged today.

Seifeddine Rezgui, 23, went to the country and took part in jihadist training in March – three months before before the atrocity, police sources have told MailOnline.

The Kalashnikov he used to shoot dead holidaymakers on the beach is also thought to have been smuggled back from Libya, separately.

He travelled to Libya without using his passport, it is claimed.

The border between Tunisia and Libya is extremely porous and it has been reported in the past that up to 3,000 Tunisians have used the route to travel to Syria to fight for ISIS.

The claims of the police source, who asked to remain anonymous, could not be independently verified, but the country’s premier has hinted at a possible trip to Libya – where ISIS have gained territory.

Authorities in Tunisia are sure Rezgui would have help to carry out the atrocity on holidaymakers on the beach on Friday.

The gunman’s father Hakim Rezgui, said his son was an ordinary football-mad teenager who liked Real Madrid and breakdancing to rap music before extremists changed him.

‘These people ruined my son’s brain with horrid thoughts and ideas, they broke him,’ said Mr Rezgui.

His killer son’s behaviour started to change a year ago when he left home to study engineering at university in Kairouan.

He moved into a cramped flat with five mystery housemates next to the Mosque of the Seven Virgins, a year ago.

Neighbours said the group led secretive lives, deliberately avoiding contact with local people and claimed that there were visits by a group of Salafists before the building was suddenly left empty.

They also reported that the housemates had ‘taken over’ the nearby mosque, which had been abandoned and had no official Imam.

‘They didn’t even say hello to us,’ said Salah Korbia, who lives opposite the tiny mosque where the friends spent much of their time.

‘Everyone in the neighbourhood was against them being there,’ he added.

He said two of them had already left the country to fight as jihadis for ISIS in Syria.

A Tunisian official involved in the inquiry said the authorities were trying to trace the men because they may have vital information about their dead housemate.

The engineering student was reportedly enrolled at the ISET technical college in Kairouan, 30 miles from Sousse, among a community of Salafist extremists.

He had completed an undergraduate degree in electronics at the technical college, before enrolling in a master’s degree in aviation.

A Facebook page reported to belong to the gunman, gives insight into the terrifying transformation.

Up until early last year, Rezgui’s posts related to his love of Real Madrid, breakdancing and rap music.

But after moving in with the five men, he began posting comments in support of ISIS and sharing the terror groups gruesome propaganda videos.

One post read: ‘If love of jihad is a crime, the whole world can witness that I am a criminal.’

Another said: ‘Heroes are in tombs, real men are in prisons, and traitors are in palaces.’

His final post from December 31 last year he denounced those celebrating New Year as ‘kuffar’ – non believers of Islam.

‘May God take me out of this unjust world and perish its people and make them suffer.

‘They just remember you when you die’.

Authorities have seized the laptop in a raid on the family’s home in Gaafour at the weekend, and are investigating why he stopped posting comments after December.

Rezgui, who had apparently been traumatised by the death of his brother in a lightning strike in 2010, was not known by to the security services, the Tunisian Prime Minister said.

His father, Hakim said: ‘People keep asking me for information and I don’t know what to tell them, I was completely taken aback by the news of what my son had done.

‘I went to sleep as it’s Ramadan and I was fasting, then at 4pm the police came to my house and said they needed me to come with them.

‘I asked why and they said, “Haven’t you been watching the news?” And that’s when they told me.’

He continued: ‘I feel the loss of the families so strongly. I feel like I have died along with the victims. I am so ashamed for me, for his mother, for all our family.’

His uncle, Ali Bin Muhammed Rezgui, 70, said that ‘everything was normal’ the day prior to the massacre.

‘He was with me on Thursday. We sat in the garden and he was perfectly normal.

‘He left here at 12pm and we have no idea what he was planning. We talked about his life and studies. That was the last time I saw home.

‘The entire family is shocked at the hidden reality of what he was capable of.’