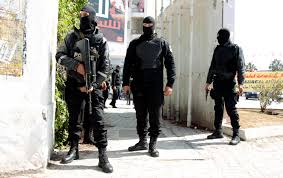 Authorities in Tunisia, engaged in a battle against home-grown militants, have cashiered 110 members of the security forces for suspected links to extremist groups, the interior ministry’s spokesman said late on Wednesday.

Their sacking “is linked…to very serious suspicions of membership in terrorist organisations or sympathy towards them,” Louguini said, adding that they were the result of investigations dating to the beginning of the year.

Senior ministry official Taoufik Bouaoun told private Radio Med on Monday that “five or six” members of the security forces had been arrested for “direct links” with smuggling or terrorism.

Bouaoun said that since he joined the ministry after last November’s elections, it had been discovered that certain appointments had not been subjected to proper security clearances.

Since veteran ruler Zine El Abidine Ben Ali was ousted at the beginning of 2011, Tunisia has been plagued by an hardliner insurgency.

Two senior politicians and dozens of members of the security forces have been killed over the past four years, and 59 foreign tourists were shot dead in two attacks this year.

Tunisia has seen tourism numbers plummet after a gunman killed dozens of holidaymakers at a beach resort in June, but hopes increased security at hotels, airports and museums can start to restore some confidence in the North African country.

“We are scared Tunisia will disappear off the tourist map,” Abdellatif Hamam, the director general of the Tunisian Tourist Office said at a tourism conference in Germany.

“The top priority for the next years will be safety, safety, safety. We cannot afford any more incidents that (target) the tourism sector,” he added.

The country, which relied on tourism for around seven per cent of its gross domestic product, is under a state of emergency after two hardliner militant attacks on tourist sites.

Hamam said Tunisia had been slow to halt the gunman in Sousse and that the country was now learning from security forces from Germany, France, Britain and Italy.