You are here: Home / Mediterranean / Tunisia explosion: suicide bomber blows themselves up outside US embassy 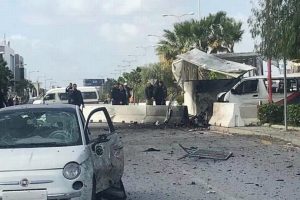 A suicide bomber has blown himself up near the US embassy in Tunisia, according to reports.

The blast is believed to have occurred 150 metres away from the walls of the embassy in the capital Tunis.

Pictures from the scene show the wreckage of a vehicle with debris scattered across a road block.

It is not yet clear if there are any casualties.

Police pushed back a gathered crowd and have established a crime scene.

Last year, two suicide bombers blew themselves up in the capital of Tunisia with one person dead.

A terror attack in Sousse in Tunisia in June 2015 by Seifeddine Rezgui left 38 holidaymakers dead – 30 of whom were British.