You are here: Home / Mediterranean / Tunisia emerges as Islamic State’s No. 1 source for foreign fighters 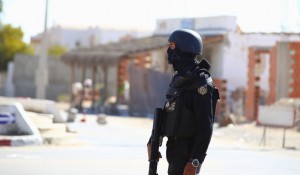 It’s considered the star performer of the ill-fated Arab Spring, the one country in the region where representative democracy has made major strides. But even here, the fight against radical Islamic violence requires an unceasing vigil.

The head of a secretive U.S.-backed counterterrorism Fusion Center based in the capital says Tunisian government authorities are keeping at least 1,000 people under surveillance in the nation on suspicion that they are clandestine operatives of the Islamic State group.

“Some have come back from Libya and some from Syria and Iraq,” said Karim Ammar, who heads the center at the heart of a growing struggle to prevent the Islamic State terrorist group, also known as ISIS and ISIL, from undermining Tunisia’s tenuous democratic rule.

There is little question that tiny Tunisia — sandwiched between the chaos in Libya and an authoritarian regime in Algeria — remains the lone beacon of hope left from the revolutions that began here in 2011 and rapidly spread across much of the rest of the Middle East.

But this sun-drenched patch of North Africa, just 62 miles across the Mediterranean from Italy, is also gripped by a difficult and dirty secret. It’s by far the No. 1 source country for foreign fighters for the Islamic State, with as many as 7,000 — more than twice the total from any other nation — having traveled to join the terrorist group’s purported “caliphate” in Syria and Iraq.

Tunisian officials, analysts and ordinary citizens say their nation is on a knife’s edge, setting a precedent for freedom in the Arab world while scrambling to establish a post-dictatorship security state that can contain the threat of attacks by hardened Islamic State fighters who have returned — all without falling back into traditional patterns of authoritarian rule.