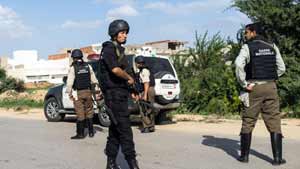 Tunisia”s National Guard dismantled a fundamentalist cell that operated in high areas in the demilitarized region of Kaserin, bordering Algeria, according to a communique of the Tunisian Interior Ministry.

It is a grouo linked to Al Qaida of the Islamic Maghreb and other extremist organizations that use the area in their trips to-from Syria, Iraq and Libya, says the text.

Armament, ammunition and special night vision gear were seized in the operation.

A commando of an unspecified nationality was killed in the clash while another that was giving logistical support to the group was captured, and the rest of the insurgents is being searched in the mountains by security forces.

Yesterday, the Tunisian Army had bombed intensively the area of Sammama mount in the region of Kaserin bordering Algeria, the site where those actions took place later.

The 100-square km demilitariuzed mountainous area of the Kaserin region is used as passage and refugee by fundamentalist groups operating there.