Tunisian authorities have detained 11 individuals involved in the recruitment of new members for Daesh the Tunisian Interior Ministry reports. 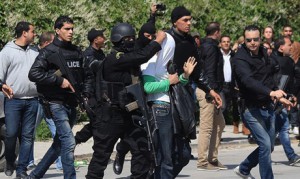 Tunisian authorities have detained 11 individuals involved in the recruitment of new members for the Islamic State (ISIL) terrorist group (known as Daesh in the Arab world and prohibited in a range of countries, including Russia), the Tunisian Interior Ministry reports.

According to the ministry’s statement on Facebook, the detained were involved in attracting youth groups to join Daesh ranks to be later sent to hotspots of violence. They were also involved in financing the families of Daesh members.

Daesh, a radical Sunni group that has ceased vast areas in Iraq and Syria and has carried out a number of major terrorist attacks, has been highly successful in promoting its radical ideology among young people across the world, particularly through social networking websites.On December 22, Tunisian President Beji Caid Essebsi prolonged for two months the state of emergency imposed in the country after the November 24 terrorist attack in Tunis, when a suicide bomber blew up a bus carrying elite presidential guards, killing at least 13 people and injuring 20.

Daesh claimed responsibility for the attack.

Tunisian Interior Ministry spokesman Walid Lougini told Sputnik earlier this month that Tunisian authorities were enhancing security measures ahead of New Year celebrations, due to the high tourism activity during this period.