You are here: Home / Mediterranean / Tunisia declares curfew after days of violent protests

Protests over unemployment rates and the economy had intensified and spread to several cities including the capital. 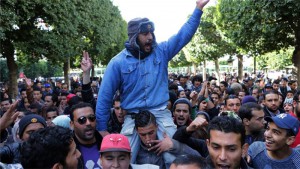 Tunisia has declared a nationwide curfew after days of protests and rioting over jobs and economic conditions, the interior ministry announced.

Protests over unemployment in the country, which started in the western Kasserine province, intensified and spread to other parts of the country on Thursday.

Solidarity rallies were held in cities including Tunis, Sidi Bouzid and Gafsa, with several reports of suicide attempts as frustration over the lack of jobs boiled over.

A policeman was reportedly killed when demonstrators overturned his car in the town of Feriana.

Protests and clashes with security forces started in Kasserine on Saturday after the death of an unemployed man who was electrocuted on top of a power pole near the governor’s office.

Ridha Yahyaoui, 28, was protesting because his name was removed from a list of potential recruits for coveted public sector jobs.

The government has ordered an investigation into the circumstances surrounding his death.

Al Jazeera’s Hashem Ahelbarra, reporting from Kasserine, said the army has been deployed to ensure the curfew is observed.

He added that Beji Caid Essebsi, the country’s president, was expected to give a speech tomorrow.

“The government is coming under intense pressure to take measures to tackle corruption and unemployment,” Ahelbarra said.

In the face of the unrest, Prime Minister Habib Essid cut short a European tour to return home on Thursday.

Tunisia’s 2011 revolution was sparked when Mohamed Bouazizi, 26, a street vendor, fatally set himself on fire in protest at police harassment.