You are here: Home / Mediterranean / Tunisia declares 30-day ‘state of emergency’ from today 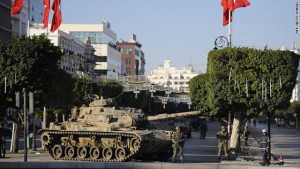 Tunisia has declared a state of emergency giving security forces more powers following the terrorist attack in which 38 tourists died.

Appealing for international counter terrorism support, he said: “In order to face up to this scourge we need to be prepared. We need to have enough troops, proper training and material means – we are in desperate need of material means.”

The state of emergency will initially be in place for 30 days.

Eight people have been arrested on suspicion of collaborating with Seifeddine Rezgui who opened fire at the beachfront Hotel Riu Imperial Marhaba in Sousse on June 26, killing 38 people including 30 British holidaymakers.

Tunisian authorities have also pledged to close some 80 mosques that were operating outside government control and accused of spreading extremism.