You are here: Home / Mediterranean / Tunisia: combat the return of jihadists fighting 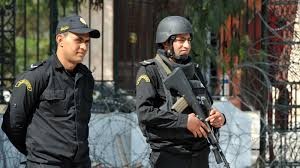 Tunisia’s security forces called on the government on Sunday to take “exceptional measures” to combat the return of jihadists fighting for extremist groups abroad.

Tunisia has seen a wave of jihadist attacks since its 2011 revolution, including on foreign tourists, and the United Nations estimates that more than 5,000 Tunisians are fighting for extremist outfits, mainly in Iraq and Syria.

“The return of terrorists from hotbeds of unrest in Tunisia is worrying and could lead to the Somali-isation of the country,” said a statement from the internal security forces’ national union, referring to the al-Qaeda-linked Shabaab group in Somalia.

Battle-hardened fighters “have received military training and have learnt to use all sorts of sophisticated weapons”, it added.

The warning came a day after the authorities said they had arrested three people including the nephew of Anis Amri, a Tunisian suspected of carrying out a deadly truck attack on a Berlin Christmas market this week.

Hundreds of people gathered outside parliament in Tunis on Saturday to protest against allowing jihadists back into the country.

The demonstrators also chanted slogans hostile to Rached Ghannouchi, leader of the Islamist Ennahdha party, who had in the past backed the idea of “repentance” in exchange for renunciation of violence.

On Sunday, he said he opposed a ban on returning Tunisian jihadists, saying the country should “assume its responsibilities”.

“This disease has to be dealt with seriously,” Ghannouchi told a public meeting, saying his “treatment” was “justice, police, education and therapy”.

On Friday, Interior Minister Hedi Majdoub told parliament 800 Tunisians who had fought for extremist groups abroad had since returned home.

President Beji Caid Essebsi said earlier this month the authorities would refuse to pardon Tunisians who fight for jihadist organisations.

“Many of them want to return, and we can’t prevent a Tunisian from returning to his country,” he said, “but we will be vigilant.”

Following a storm of criticism in the press and on social media, on December 15 Essebsi told Tunisian television that “we will not be indulgent with the terrorists”.

On Sunday, the interior minister said five people had been arrested in Ariana, north of Tunis, suspected of “recruiting young people to send them to conflict areas”.