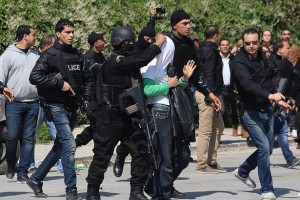 The Tunisian police has broken up three “cells” that were recruiting fighters for Islamic State and arrested 11 people suspected of trying to join the Islamist militant group in Libya, the Tunisian Ministry of Interior said.

Tunisia has been on high alert against possible attacks since Islamist gunmen killed 21 tourists in March at the popular Bardo Museum in Tunis. In June, a man shot dead 38 foreigners at a beach hotel in the southern city of Sousse.

Islamic State claimed responsibility for both attacks. Officials said all three attackers were trained in jihadist camps over the border in Libya, where political chaos has allowed Islamist militants to grow in strength.

Last week, Tunisia seized two car bombs and weapons on the border with Libya. In July, the government began building a wall along the border to stop Islamist militants slipping across.

The government says that more than 3,000 Tunisians have left to fight for Islamist militant groups in Syria, Iraq and Libya. Some of them have threatened to return home and carry out attacks on Tunisian soil.