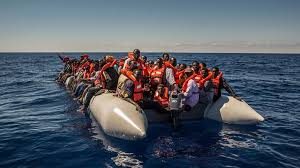 In the last six weeks, Tunisia has become a focus for mass migration as authorities worry that now the Libyan route has been all but closed, many migrants are looking to get to Europe from the Tunisian coast instead, like reported by breitbart.com.

Some observers of the migrant flow say that the numbers of migrants heading to Europe from Tunisia could easily rival that of the spring of 2011 when some 40,000 individuals left the country to escape the failing Ben Ali regime, one of the first governments to fall in the Arab Spring.

Estimates say that in the last five to six weeks alone between 1,800 and 3,000 migrants have set off from Tunisia. A total of 60 boats are said to have made the voyage, each holding between 30 and 50 people, reports Die Welt.

The Tunisian government has been relatively silent on the issue, and this may be because they do not want to strain their relationship with the European Union.

The only concrete numbers on hand are from those arrested in Italy in late September when 17 ships reached the Italian coast between September 24th to September 30th. The number arrested by Italian authorities totals around 550 individuals.

Officials in Italy claim that around 2,700 migrants have arrived in recent weeks from Tunisia, but that could be a conservative estimation as many migrants opt not to register as asylum seekers until they reach the country in which they desire to live, most often in northern Europe where state benefits are more generous.

Experts believe there are two main reasons for the increased numbers. The first is the closure of the Libyan migrant route and the second is economic stagnation in various parts of Tunisia itself.

Reports of rumours have also emerged that people smugglers have been bribing Tunisian border officials to allow more boats to set off for Europe and others have accused Tunisia of turning a blind eye to the problem in order to negotiate development aid from the EU.

Due to the fact that the recent Marseille attacker and the Berlin Christmas market terroristwere both Tunisian failed asylum seekers, many are concerned over the possibility of further Tunisian Islamic radicals smuggling themselves into Europe.