You are here: Home / Mediterranean / Tunisia acts on terrorism 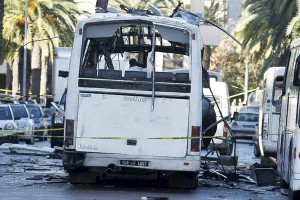 Tunisian President Beji Caid Essebsi cancelled his scheduled trip to Switzerland Wednesday in the wake of the bombing of a bus carrying presidential security guards on Tuesday, 23 November, killing 13 of those on board and wounding more than ten others.

The incident, claimed by Islamic State (IS), trained attention on the danger of terrorist elements returning to Tunisia from various regional hot spots, whether in neighbouring Libya, Syria or Iraq.

The suicide bombing, on Mohamed V Street in Tunis, delivered a new blow to stability in the country, still emerging from the delicate interim period following the overthrow of the Zine El-Abidine Ben Ali regime.

The Tunisian Ministry of Interior announced that, using fingerprints, it has identified all of presidential guard members who were killed in the blast. The 13th body is presumed to be the terrorist who carried out the attack. The ministry said that the attacker used a backpack or jacket filled without 10 kilos of military-grade explosives.

The following day, IS claimed responsibility for the attack. In a statement released on a pro-IS social networking site, the terrorist organisation said that the perpetrator, whom it named as Abu Abdullah Al-Tunsi, managed to board the bus as it travelled along Mohamed V Street in downtown Tunis. “When he reached his destination, he detonated his explosive belt in order to kill about 20 security elements,” the statement said.

In the aftermath of the attack, the Tunisian parliament summoned Prime Minister Habib Essid to discuss the security situation in the country and efforts being taken to fight terrorism. The Tunisian National Security Council had already instituted several urgent measures.

Borders with Libya were closed for 15 days as of midnight 25 November, surveillance was intensified on persons suspected of jihadist links, social networking pages linked with terrorism were banned, and security screening was tightened on persons returning from Syria, Libya and Iraq. Tunisian authorities have also begun to scrutinise the legal status of foreigners residing in the country and to tighten all land, air and sea borders.

The bloody attack in the nation’s capital triggered appeals for a more effective and comprehensive strategy to combat terrorism. Political parties and NGOs called for “national unity” and to unify ranks behind security forces and the army in their war against terrorism. Politicians and government officials lashed out at the deteriorating state of security in Libya, which has become a source of IS operatives who infiltrate into Tunisia to carry out terrorist attacks.

Rafik Chelli, the minister in charge of security, blamed Libya for the deterioration of security in Tunisia. “All the terrorist operations carried out in this country were planned in Libya,” he said in an interview on a local radio station. “Everything is prepared in Libya. The leaders of the Tunisian terrorist groups are there in Libya.”

According to other security officials, the explosive substances used in the recent attack were smuggled into the country from Libya.

Chelli said the perpetrators of two earlier attacks in Tunisia, one against the Bardo Museum and the other against a tourist hotel in Sousse, had gone to Libya where they received training.

“We know the places and the training centres. They receive ideological indoctrination and military training,” he said, adding that Tunisian jihadists go to Libya and return “secretly via smugglers.” Once back in the country, “they await the day when they receive instruction and arms, and carry out the operation.” He added, “There is an alliance between smugglers and terrorism [in Tunisia].”

Security demands in the aftermath of the attack have upped the pressure on the Habib Essid government, already strained by tensions in the government coalition led by the Nidaa Tounes (Call of Tunisia) Party. Some Tunisian politicians criticised the security measures taken by the government in the aftermath of the attack. A more comprehensive and effective strategy is required, they said.

At a general session dedicated to the discussion of the 2016 national budget and attended by Essid, MP Ahmed Al-Sadiq said, “We are with national unity and behind the government at this difficult moment. But we believe that our people had been expecting more measures.” He said that there were “strategic decisions” that the government had not yet taken with regard to restructuring the security system and reviewing the plan for the redeployment of the military.

Another MP, Abdel Latif Mekki, who represents the Islamist Ennahda movement, the second-largest bloc in parliament and a partner in the government coalition, called for a national antiterrorism conference.

Observers noted his conciliatory tone and suggested that this is an indication that Ennahda does not want to take escalate the situation to gain advantage over the ruling Nidaa Tounes Party, which is reeling under internal rifts that could lead to a collapse of the current government.

President Essebsi, in a national address Sunday evening, appealed for a halt to strikes and other demonstrations as a way to help in the fight against terror and strengthen the social peace. He also urged Nidaa Tounes to overcome the internal rifts that threaten to divide the party.

“The economy in Tunis is in a difficult state. It is essential that we emerge from this condition by attracting foreign investment as well as domestic investment. But this can not be achieved until we create the conditions conducive to this and the appropriate climate,” he said.

Essebsi acknowledged that his party, the largest in Tunisia, is in the grips of a “leadership crisis.” That leadership, he said, lacks a culture of dialogue and has not taken into consideration the critical state of affairs in the country or Tunisia’s image abroad.

It has also ignored “the slogan that we have adopted for our movement: ‘The nation comes before political parties.’” He went on to say that the crisis in the party has reached the point where he feels he has to intervene, leading him to chose 13 people to act as intermediaries between the two camps that are fighting over control over the party.

Essebsi’s speech and, in particular, his bid to intervene in the party’s internal dispute triggered harsh criticisms across social networking sites and elsewhere in the media. Many critics were angered by the fact that he, in his capacity as president, had devoted the greater portion of the televised address to his party, at a time when the country was in a state of emergency and greater Tunis was under curfew.

Tunisian Minister of Interior Najem Gharsalli was also summoned to parliament to discuss the security situation and the budget for his ministry. His ministry’s antiterrorism strategy is founded on three principles: prevention, protection and reaction.

The “prevention” plan enabled security authorities to pre-empt 13 terrorist attacks that “were more dangerous than the terrorist operation that occurred last Tuesday,” he said. He added that the Sousse attack could have had even more disastrous consequences than it had.

According to Gharsalli, the Interior Ministry has also been allocated funds for construction of a state-of-the-art operations room. Estimated to cost 16 million dinars, the facility will contain a live broadcast studio to support the security agencies’ media performance. The project will be carried out in collaboration with friendly nations such as France, Britain and the US.

He added that the Tunisian government is determined to halt the phenomenon of “moles in sovereign institutions”, suggesting that there are security personnel who are suspected of belonging to terrorist organisations or who harbour extremist tendencies.