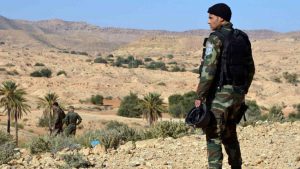 Three Islamic militants, including an Asian woman‮ ‬and local leader in Islamic State, were killed in Tunisian mountains near the Algerian border‮ ‬in two police operations, a security official said on Thursday, like reported by usnews.com.

Six years ago an Islamic State militant shot dead 39 foreigners on a beach in Sousse, triggering an exodus of tourists and severely damaging Tunisia’s economy.

Since then Tunisia has grown more effective in preventing and responding to attacks, but sleeper cells still pose a real threat, especially with the return of jihadists from Syria, Iraq and Libya.

‮”‬Our forces killed a terrorist, as his Asian wife blew herself up, killing also her baby in Saloum mountain,” said Colonel Houssem Jbebli, an official in National Guard.

He added that Hamdi Dhouib, a local leader in Jund El Khilafah, an affiliate branch of Islamic State was also killed in an ambush in Mghila mountains.

The mountainous Mghila and Saloum area, near the impoverished city of Kasserine, is home to an Islamist militant group that the Tunisian army has been fighting for years.