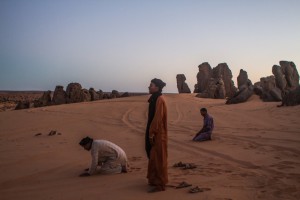 Fierce fighting between indigenous Tuareg and Tebu tribes in the isolated Saharan town of Ubari, near Libya’s lucrative southern oil fields and vast frontier with Algeria, Niger, and Chad, has entered its 10th bloody month.

The oasis, once a draw for tourists crossing kilometres of spectacular desert dunes, is now the site of a vicious proxy battle between outside powers vying to divide local tribes and rule the remote mineral-rich and politically volatile area.

“We want peace and we want Libya to prosper,” said Tahar Wafalla, a Tuareg leader in his mid-30s who mans a nightly watch of volunteer fighters in Ubari’s outskirts. They all said they brought their own weapons and ammunition to the battle.

Since September, the conflict has claimed hundreds of lives and displaced most of the region’s Tuareg and Arab families, as well as the Tebu minority. Businesses and homes in the town, which had a pre-war population of 35,000, have been destroyed, and the one road leading through Ubari has been held hostage by the fight.

The Tuareg fighters talk softly and laugh while they cook their evening meal over a bonfire, after an exhausting day of violent skirmishes with Tebu snipers in Ubari’s devastated downtown, and mortar fire on the nearby strategic Tendi mountaintop. They tense up when vehicles approach over sandy tracks in the dark, and strain to hear distant gunfire.

They have been guarding Ubari’s residents against Tebu fighters, said Wafalla, who is from the remote Tuareg town of Ghat, nearly 300km southwest along a narrow, decrepit road skirting the picturesque Acacus mountain range towards Algeria’s border.

Former dictator Muammar Gaddafi heavily recruited from Ghat for his army and intelligence services, promising the Tuareg – who are stretched across borders into Algeria, Niger and Mali – a Libyan sanctuary, jobs and rights. But many Tuareg still await their promised Libyan ID cards, access to a quality education, and an escape from the poorly paid security sector or hard-scrabble life of smuggling.

Tuareg youth have been hit hardest, impoverished and hemmed in by Libya’s violent chaos and skyrocketing unemployment. Like members of the Tebu tribe, who live mostly between the southern towns of Murzuq and Kufra, as well as in neighbouring Chad, many Tuareg have little economic alternative but to use their innate knowledge of the desert to transport a cross-border cargo of people, subsidised gasoline, drugs, and guns.

Mohammed, 28, wears a baseball hat, black T-shirt and gold chains as he hawks black market gasoline in jerry cans by a dusty football pitch in Ghat to customers desperate for fuel. Gas stations are often closed around the southern city of Sebha, mostly due to corruption, and the one road from there to Ghat is blocked at Ubari by Tebu snipers.

Mohammed buys gas in Ubari from traders and shuttles it to Ghat, marking up the price by one-third, to 300 Libyan dinars ($220) for a full tank.

“There are no jobs and the quality of life is bad,” Mohammed told Al Jazeera, noting many of the young men here smoke hash and smuggle drugs, migrants, and guns.

“We smuggle because we know the desert, even though the French are there,” Mohammed said. He laughed when asked about the lack of roads. “We use the stars, not GPS.”

Although many Tuareg soldiers remained loyal until Gaddafi was toppled in 2011, the Tebu tribe sided with the revolutionaries hoping for a better life. So did Tuareg men like Wafalla, who, under Tuareg leader Abu Baker Issa – recently killed in a Tebu ambush in Ubari – formed a revolutionary unit to safeguard Tuareg territory in the southwest.

In Wadi Meggedet, looming volcanic pinnacles jut out of a remote sandy moonscape near the Algerian border, hours off road from Ghat’s asphalt highway. A group of young Tuareg students, border guards and musicians travel here often to sit under the stars, drink tea, eat and play the guitar and drums.

Mojahad, 37, like Wafalla, said he defected to join Issa’s revolutionary forces securing the borders. But he and his colleagues have not been paid their government salaries for three months, he said, and they have few patrol cars and weapons.

Recently, many smuggling paths have shifted away from Tuareg territory in the southwest to the border due south of Sebha, under Tebu control and French surveillance.

Libya’s duelling governments have backed armed groups across the country fighting over oil assets and infrastructure. They have thrown support to opposing forces in the Ubari fight, but both the Tuareg and Tebu say while it is enough to sustain the fighting, it is not enough to win.

Misratan forces, who are based in Sebha and, alongside the Tuareg, guard Libya’s second-largest oil field at Sharara, are a key power in the Tripoli-based Libya Dawn government. Misrata provides medical aid and gasoline to Tuareg fighters, while Tripoli’s defence ministry is said to provide some financial backing.

The internationally recognised Dignity government, based in Tobruk and Beida, along with General Khalifa Haftar’s force, have the United Arab Emirates and Egypt as large supporters and back the Tebu. While the Tebu have largely aligned with the Dignity government, the Tuareg community is split between the two governments.

However, all Tuareg residents, who spoke with Al Jazeera, said they were united in defending their homes in Ubari, noting loyalty to their tribe trumps politics.

Meanwhile, the United States and European Union have expressed concern about the growing threat of the Islamic State of Iraq and the Levant (ISIL) in the north. There are also fears the group could take root in the chaotic south. They have been scrambling for solutions to stem the tide of thousands of African migrants and asylum seekers traversing the desert en route to Europe. Many Tuareg are sceptical of a recent ceasefire brokered in Ubari, the latest in a series of ineffectual agreements for what they now consider a proxy war.

The Tuareg, who have a history of conflict with France in north Africa, are suspicious of French military and economic aspirations in the area. There is a French military base 100km into Niger from the Libyan border, as well as a US military presence.

Meanwhile, Algeria has bolstered its border security to control spillover violence from Libya, effectively cutting off the Libyan Tuareg from their Algerian kin.

Additionally, some Tuareg believe that powerful Libyan government interests are pitting the south’s indigenous tribes against each other to control the area’s lucrative oil fields and border trade.

“There were so many katibas [armed groups] in Ubari to defend the tribes before the fighting, and we told them that this was wrong, that they should be accountable to the government,” said Yahya Ibrahim, a Tuareg school teacher in Ubari. He was forced to flee with his family to Ghat when his home on the front-line was burned down.

“I think Libyans can govern themselves, but the problem is from the outside,” he said. “If this was purely Libyan, we could solve the problem between ourselves.”