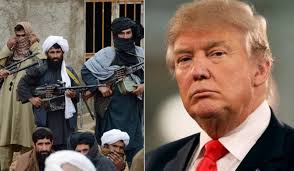 President Trump today will huddle with his national security team at Camp David in Maryland to discuss the country’s strategy in Afghanistan, like reported by abcnews.com.

The president is being presented with a variety of options, including withdrawing all American troops or adding 3,900 more to the current 8,400 total.

Here is a look at the options being considered by the Trump administration for what is now being called the South Asia strategy.

What is the South Asia strategy?

The Trump administration has been debating for months what strategy to pursue in Afghanistan. The debate originally focused on the U.S. military’s role in Afghanistan and a request for additional American troops to advise and assist the Afghan military fighting the Taliban and the ISIS affiliate in that country.

Defense Secretary Jim Mattis told Congress in June that he believed the administration would formulate its Afghanistan strategy by mid-July.

But that deadline came and went because Trump’s national security team debated whether the strategy should be broader in scope.

It has evolved into what is now known as the South Asia strategy, and it includes the regional implications for neighboring countries like Pakistan, India, China and Russia. The strategy would also look at what role these countries can play in reversing Taliban gains on the battlefield.

Mattis told reporters Thursday that the Camp David meeting will “move this toward a decision.” Mattis, however, did not say that a final decision would be made on Friday, only noting that a decision will occur in “the very near future.”

A lot of the attention initially focused on whether the Trump administration would add more U.S. troops.

In February, Gen. John Nicholson, the senior U.S. commander in Afghanistan, told Congress the fight against the Taliban in Afghanistan was “a stalemate” and that he would like additional troops to enhance the advise and assist mission being carried out by 8,400 American troops and 5,000 NATO forces.

Those troops would buttress the advise and assist mission helping the Afghan military fighting the Taliban, as well as add additional firepower to the counterterrorism mission against ISIS and al Qaeda.

One official said as recently as this week that recommendations were still being made as to what kinds of U.S. military support those additional troops could provide.

But Mattis has been firm that the debate over an Afghanistan strategy should be more than just a decision about whether or not to send more American troops.

Military officials are now evaluating whether neighboring countries can play a role in the strategy. For example, it’s clear the administration wants Pakistan to do more on its side of the border to take on the resurgent Taliban and ISIS-Khorasan.

The internal debate has also broadened into a discussion of whether American troops should remain in Afghanistan.

What are the options?

Last week, Trump said he would be making a decision soon on Afghanistan.

“I’ve been looking at it,” he said. “It’s our longest war in history, 17 years. That’s unacceptable.”

Trump is said to have been dissatisfied with the original strategy review and the request for more American troops, one reason why his national security team has developed additional options.

Mattis said on Monday the Pentagon is still working on options for the president.

“We’re sharpening each one of the options, so you can see the pluses and minuses of each one,” Mattis said. “So that there’s no longer any new data you’re going to get.”

Another option would shift a portion of the U.S. military role to private military contractors.

When asked specifically about that option, Mattis responded, “It’s part of the options being considered, and the president’s open to the advice of the secretary of state and myself and the director of the CIA.”