You are here: Home / Senza categoria / Trump: Saddam Hussein ran the country and now we have ISIS and Iran 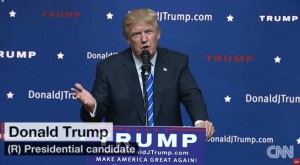 Donald Trump criticized his opponent Jeb Bush in the US presidential election race in 2016, including recalling the state of affairs in the Middle East after the occupation of Iraq.

Trump said “I’m not a fan of Hussein, but he ran the place, and he had no weapons of mass destruction,” Trump says in speech in Hampton, N.H. “Now, instead of Saddam Hussein, we have far more brutal” situation with ISIS; predicts Iran will cause problems too”.

Trump touts his prior calls for U.S. to “take the oil” in Iraq; now Islamic State, Iran have the oil

He added, “Jeb Bush, I think that the Iraq war is a good thing, I’m from the people who support the military operations, but I know when to use it .. we spent two trillion dollars in Iraq, and what we left is hundreds of thousands of victims and injured veterans everywhere , we did not gain anything from all this . “

The presidential candidate, added, “Now, Iran controls Iraq, and the areas that they do not want , they give them to ISIS , the organization controls and sells oil to China.. there were wars for years between Iraq and Iran and I have repeatedly said in the past that if we overthrew one of these two countries, the other will dominate on its neighbor. “

He added, “Look now to what we have done in that region, we removed the stability from the Middle East and is now in chaos, while Jeb Bush was not able to answer a simple question about whether Iraq war was a good thing or bad thing? To come five days later to say that the war was a bad thing after lengthy sessions with his advisers, to invoke his brother’s policy that drove Saddam Hussein out