You are here: Home / MidEastGulf / Trump is assembling an Arab Army to replace US troops in Syria 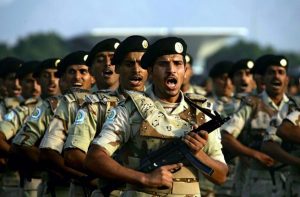 The Trump administration is hoping to secure a commitment from a handful of Middle Eastern states to assemble what is effectively an Arab army for a permanent military “stabilizing force” in Syria that would replace the U.S. military deployment in Syria and prevent ISIS from regaining lost territory in Syria’s battle-ravaged east, like reported by zerohedge.com.

According to the Wall Street Journal, Trump’s new neocon National Security Advisor John Bolton, only in his second week on the job, has discussed the possibility of contributing troops with Egypt’s top intelligence official – allegedly one of the most influential figures in Egypt’s military-led regime.

And while full-scale commitments from Egypt and a handful of Gulf states remain elusive, should Trump succeed, he’d be able to tout a victory in an area where President Obama failed. Indeed, the Obama administration sought similar troop contributions from Syria’s neighbors but came up empty handed.

The Trump administration is seeking to assemble an Arab force to replace the U.S. military contingent in Syria and help stabilize the northeastern part of the country after the defeat of Islamic State, U.S. officials said.

The initiative comes as the administration has asked Saudi Arabia, Qatar and the United Arab Emirates to contribute billions of dollars to help restore northern Syria. It wants Arab nations to send troops as well, officials said.

Details about the initiative, which haven’t been previously disclosed, have emerged in the days since the U.S.-led strikes on sites associated with the Syrian regime’s chemical-weapons capabilities.

The security force would have two goals: stop ISIS from reestablishing a presence in Syria, while also stopping Iran or Iranian-backed sources from doing the same (though Israel already has the latter pretty well under control).

While on Monday the White House refuted claims by French President Emmanuel Macron that he “convinced” Trump to agree to an extended US presence in Syria, it has been forced to concede that the US has no immediate plans to pull US troops from Syria, as President Trump recently promised. Raising an army of troops from regional neighbors would allow the Trump administration the best of both worlds: It could safely pull some or all of its troops while ensuring that the region remains protected.

Mr. Trump, who has expressed growing impatience with the cost and duration of the effort to stabilize Syria, alluded to the push on Friday night, when he announced the missile strikes.

“We have asked our partners to take greater responsibility for securing their home region, including contributing larger amounts of money,” Mr. Trump said.

In early April, Mr. Trump spoke about the need to speed the withdrawal of the 2,000 troops the U.S. has in Syria, a position at odds with many top advisers who worry that leaving the country too soon would cede ground to Iran, Russia, their proxies or other extremist groups. The new administration initiative is aimed at avoiding a security vacuum in Syria that would allow Islamic State to return or ceding hard-won gains to Iranian-backed forces in the country.

The US has reached out to Egypt and the Gulf States, including Saudi Arabia, Qatar and the UAE. Of course, one “Middle East expert” quoted by WSJ claimed that defeating Islamic State in Syria remains a challenge, while assembling a fighting force consisting of Arab troops would face certain challenges.

Charles Lister, a senior fellow at the Middle East Institute, said that assembling a new force would be a challenge because Saudi Arabia and the U.A.E. are involved militarily in Yemen, and Egypt would be reluctant to defend territory that wasn’t controlled by the regime of President Bashar al-Assad.

Nor, he said, would Arab states be eager to send forces to Syria if the U.S. military didn’t agree to keep some troops there.

“There is just no precedent or established basis for this shaping into a successful strategy,” he said.

And many questions remain about whether the U.S. military would maintain some involvement in executing such a plan. U.S. troops in Syria, and the Kurdish and Arab fighters they work with, have been protected by American air power. It remains unclear what role, if any, U.S. warplanes might play and who would call in airstrikes if they were needed by a future Arab force.

“It has to be strong enough to face down Assad or Iran if either seeks to reclaim territory, perhaps with Russia’s help,” said Michael O’Hanlon of the Brookings Institution, referring to the new force.

Other complications: the Arab troops would be expected to cooperate with US-backed forces like the Kurds and other groups (some of which have extremist views) already operating in Syria. It also remains unclear what role the US airforce would play. Furthermore, the US-backed force would need to counter Syrian leader Bashar al-Assad if he tries to claw back some of his lost territory with the help of Russia or Iran.

Estimates vary, but it’s believed that between 5,000 and 12,000 Islamic State fighters are still operating in eastern Syria.

Erik Prince, the founder of security firm Blackwater USA and the brother of Betsy Devos, told WSJ that he’s been contacted by Arab officials about building a security force that would operate in Syria, but that these countries are waiting to see what Trump will do. Egypt’s willingness to support a fighting force is also far from clear. It has enough on its hands battling ISIS-linked militants in the Northern Sinai Peninsula, who late last year carried out one of the deadliest attacks in the region when they killed more than 300 people at a Mosque. Egypt has rarely deployed troops abroad since the country sent more than 30,000 soldiers to join the American-led coalition fighting Iraq in the 1991 Gulf War. Its government has also occasionally made comments supporting the regime in Damascus. Even if countries didn’t want to send troops, they could help in other ways by supplying money, logistics support or military training.

Saudi Arabia and the UAE have already helped pay stipends for US-backed fighters, not to mention directly fund the very Islamic State terrorists that the US is allegedly fighting. And Trump has already asked his Saudi friends to contribute $4 billion to restoring areas of Syria once held by ISIS; so far they have been rather quiet, perhaps hoping to IPO Aramco before committing what is hardly pocket change to fighting their own war.

To be sure, Russia’s response is pending. Perhaps Putin will decide to respond in kind and invite Chinese troops in Syria as part of his own “multinational” response to oppose any new Arab army, assuring that any attacks in the war-torn nation guarantee a new world war.