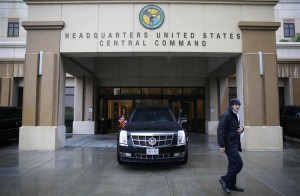 US President Donald Trump is set to meet officers at the forefront of implementing his new strategy to defeat the Islamic State group, during a visit to US Central Command on Monday, like reported by alaraby.co.uk.

Trump will stop off at Centcom headquarters in Tampa to visit the military command that plays a key role in Operation Inherent Resolve – the US-led mission to “degrade and defeat” the Islamic State group – which has resulted in 17,861 strikes across northern Syria and Iraq since August 2016.

In late January, Trump ordered generals to begin a 30-day review of the US strategy to defeat the Syria and Iraq-based militant group.

Trump had made fighting “radical Islamic terrorism” a central plank of his election campaign and the issue is emerging as the organising principle of his foreign and domestic policies.

He used potential cooperation in the fight against the Islamic State group as a reason to embrace Russia and has tried to implement an order banning refugees and nationals of seven Muslim-majority countries from entering the United States.

The ban has spurred an unprecedented battle with the courts. On Sunday, Trump tried to pin the blame for future attacks on the federal judge who blocked his executive order.

“Just cannot believe a judge would put our country in such peril. If something happens blame him and court system. People pouring in. Bad!” Trump tweeted.

He did not offer evidence for the suggestion that would-be terrorists are flocking to the country.

Most experts express more concern about Americans becoming radicalised and carrying out IS-inspired attacks, rather than the group dispatching clandestine agents around the world.

Hundreds of Trump’s own diplomats have voiced their opposition to the ban.

Taking the fight to IS

The contours of Trump’s policy to fight the Islamic State group abroad are still coming into focus.

On 28 January, he signed a presidential memorandum that called for a review including any “recommended changes to any United States rules of engagement.”

That could foreshadow a tougher approach, but it is one that some experts believe could fuel radicalisation.

During Trump’s first days in office, US Special Forces carried out a raid against al-Qaeda in Yemen which resulted in the deaths of an eight-year-old girl, a US soldier, 14 suspected militants and dozens of other civilians.

Trump also called for the “identification of new coalition partners” – a likely nod toward Russia.

Moscow has deployed aircraft, naval assets and troops to Syria, but has so far trained its fire on rebels with the aim of propping up Bashar al-Assad’s regime.

After substantial territorial gains, IS is now on the back foot, struggling to hold onto the Iraqi city of Mosul and with its “capital” in Raqqa under threat.

But the battle is approaching a fork in the road.

Trump has reportedly shelved his predecessor Barack Obama’s plans for taking Raqqa with the help of Kurdish forces and must soon decide how to proceed.