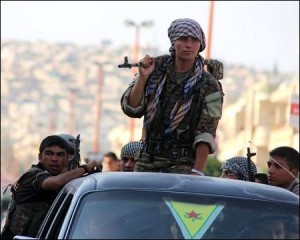 Planning for the final assault on Raqqa, the capital of the Islamic State’s caliphate, had been grinding on for more than seven months. There had been dozens of meetings of President Barack Obama’s top national security team, scores of draft battle plans and hundreds of hours of anguished, late-night debates, like reported by ekurd.net.

There were no good options, but Obama’s top foreign policy advisers were convinced that they had finally settled on an approach that could work – arming Kurdish fighters in northern Syria, current and former U.S. officials said. There was just one problem: The Obama team had deliberated for so long that there was no time left to pull the trigger. Donald Trump’s advisers had also sent word that they wanted to make the decision.

So on January 17, just three days before the transfer of power, Obama directed his national security adviser to hand over to the Trump team a paper detailing the plan to arm the Kurds, including talking points that President Donald Trump could use to explain the move to Turkey’s president, who officials knew would be furious. The Turks viewed the Kurdish fighters as terrorists and their No. 1 enemy.

Obama hoped that his last-minute preparations would clear the way for Trump to authorize a swift assault on the Islamic State’s most important stronghold, where U.S. intelligence officials say militants are plotting attacks outside Syria.

Instead of running with the plan, Trump’s national security team deemed it wholly insufficient and swiftly tossed it.

To the incoming Trump administration, Obama’s approach was so incremental and risk averse that it was almost certain to fail. “They provided the information, but we found huge gaps in it,” said a senior Trump administration official who reviewed the document. “It was poor staff work.”

The Obama White House viewed its Syria plans as the product of years of experience in a region where every move carries unintended and potentially catastrophic consequences. Those who steered the Obama administration’s Syria policy insisted that the new White House did not understand the complexity of the issue, but soon would.

The troubled handoff of one of the United States’ most vexing national security problems shows how far the pendulum has swung between two presidents who in many ways are complete opposites. Obama sweated the smallest details of U.S. military and intelligence operations, often to the point of inaction.

Trump has made it clear that he prefers to go with his gut and has promised a swift and brutal campaign that will “utterly destroy” the Islamic State. In meetings with his national security team, he has signaled his desire to give Defense Secretary Jim Mattis, whom he regularly refers to as “Mad Dog,” a free hand in doing whatever it takes to fight terrorism.

It is up to Mattis and the rest of Trump’s national security team to translate the president’s campaign trail pronouncements into policy. Trump’s more aggressive approach could speed the destruction of the Islamic State in Syria and Iraq, but also could lead to an increase in civilian deaths, fueling anger toward the United States.

Trump and his top advisers also could decide to increase coordination with Russia and even Syrian President Bashar Assad to seize Raqqa. Or he could ultimately conclude, as Obama did, that arming the Kurds represents the best of several bad options.

The policy dilemmas that Obama and his team spent more than seven months deliberating will be decided over the course of the next 30 days in a review led by Mattis and the Pentagon. Trump has directed his defense secretary to bring him multiple options and to ignore the restrictions on troop numbers and civilian casualties that were put in place by Obama.

“The message to the Pentagon was to widen the aperture,” said the senior administration official, who like other current and former officials asked for anonymity to discuss sensitive planning. “Give us all of your options.”

The policy dilemma facing Trump began with a decision made by the Obama administration in a moment of desperation in 2014.

Islamic State fighters had just seized huge swaths of territory in Iraq and Syria. Obama decided to intervene militarily, but ruled out the use of American ground forces on the front lines.

The Pentagon needed to find local partners in a hurry, and the Syrian Kurds stepped forward. America’s budding battlefield alliance with them carried big strategic risks. The Kurdish fighters who volunteered to help the Americans had ties to the Kurdistan Workers’ Party, or PKK, which the Turkish and U.S. governments considered a terrorist group.

In contrast to Obama, Turkey’s president Recep Tayyip Erdogan didn’t see the Islamic State as his country’s No. 1threat. In private meetings with senior U.S. officials in 2014, Erdogan said the Kurds were his top concern and that removing Assad ranked second, according to U.S. and Turkish officials.

By the fall of 2016, after two years of tension between Obama and Erdogan because of different priorities, a U.S.-backed offensive using Kurdish forces to recapture Raqqa was finally within sight, and Gen. Joseph Votel, the commander of American forces in the Middle East, asked for authorization to arm them for a push into the city.

The proposal divided the Obama White House. Then-Defense Secretary Ashton Carter backed the plan, but others worried that it would deepen the rift with Ankara.

Among the biggest skeptics was Susan Rice, Obama’s national security adviser. When she asked Marine Gen. Joseph Dunford, the chairman of the Joint Chiefs of Staff, whether an immediate decision was needed, the general said he was still evaluating whether the Turks were serious about their offer to provide Turkish forces to take Raqqa instead of the Kurds.

For two years inside the Pentagon, Turkey’s promises of sending rebels and later its own troops were viewed with deep skepticism and derisively dubbed “Erdogan’s ghosts” or the “unicorn” army, according to current and former defense officials. Carter and other defense officials worried that Dunford’s response gave the White House another reason to delay a decision.

By late 2016, Dunford had concluded that the Turks wouldn’t produce the forces to retake Raqqa. With less than three weeks left in the Obama administration, Dunford and Carter submitted a formal request to arm the Kurds for the assault with armored vehicles, antitank weapons, Russian-made machine guns and mine-clearing equipment.

The Pentagon pushed for an immediate decision, warning that if the Kurds did not receive the equipment by mid-February their offensive on Raqqa would stall. A decision not to arm the Kurds could delay the Raqqa operation by up to a year, U.S. officials warned.

The Pentagon also was alarmed by increasingly dire warnings from senior counterterrorism officials about terrorist attacks being planned inside the city.

On Jan. 10, just 10 days before Trump’s inauguration, Obama’s top advisers huddled in the Situation Room to weigh the Kurdish proposal, which would be the last major national security decision of the outgoing administration.

Carter argued that the Kurds understood that they would have to turn Raqqa over to local Arab forces as soon as the Islamic State was defeated.

Samantha Power, the outgoing U.S. ambassador to the United Nations, and the U.S. ambassador in Ankara, among others, warned that moving forward with the plan would further damage relations with Turkey. It also would put the United States in the unacceptable position of supporting allies of a terrorist group that was carrying out mass-casualty attacks on a NATO member, they said.

Everyone in the Situation Room that day agreed on the need to consult with the Trump team. There was no point taking such a consequential step if the new president might reverse it.

At the end of the meeting, Rice thanked everyone for their hard work and led a champagne toast.

Shortly afterward, Rice spoke to retired Lt. Gen. Michael Flynn, her counterpart in the incoming administration, about the proposal.

“Don’t approve it,” Flynn responded, according to two former officials briefed on the exchange. “We’ll make the decision.”

On January 17, Obama chaired his final National Security Council meeting and directed his team to leave the decision on arming the Kurds to the Trump administration. In one of his last acts as commander in chief, he approved the deployment of two or three Apache attack helicopters to Syria and authorized the Pentagon to provide more support to Turkish forces fighting for the Syrian town of al-Bab.

Rice prepared briefing papers for Flynn, emphasizing the importance of moving quickly to arm the Kurds.

Obama told a small group of aides that he would personally discuss the importance of the matter with Trump on the morning of the inauguration, possibly in the limousine on the way to the Capitol for the swearing-in ceremony.

“Welcome to the NBA,” Obama said he planned to tell his successor, according to officials present.

The recommendation was dead on arrival at the Trump White House.

The Obama plan required U.S. forces to train the Kurds how to use the new equipment and fight in a densely packed city, but it lacked details about how many U.S. troops would be required and where the training would take place, the Trump administration official said. Trump officials said they were dismayed that there was no provision for coordinating operations with Russia and no clear political strategy for mollifying the Turks.

Nor were there contingency plans if the Kurdish attack stalled, the senior Trump administration official said.

“What bothered us most of all was that there was no ‘Plan B,’ ” the Trump official said.

To the Trump team, it seemed as though the Obama administration had delayed authorizing the plan because they knew it was inadequate and did not want to be held responsible, the official said.

A senior Obama administration official said the criticism was unfounded and a sign of the new White House’s “intelligence insecurity.” In addition to the short memo that Rice gave Flynn, the outgoing administration left a thick package of supplemental material, the Obama official said.

Most of the shortcomings outlined by the Trump team were obvious to Obama’s advisers, he added. In fact, the senior Obama administration official said, arming the Kurds was Obama’s Plan B, after it became clear that Plan A – using Turkish forces to take Raqqa – would not be feasible.

It is up Mattis and Dunford to sort through Syria’s many complexities and come up with a new plan. At the end of Obama’s term, Dunford emerged as one of the most passionate supporters of arming the Kurds, the senior Obama administration official said. Aides declined to describe Mattis’s thinking on the option. Trump has promised to give Dunford and Mattis a free hand, which could lead them right back to some variation of the Obama plan.

“He’s a businessman,” the senior Trump official said of the new president. “His attitude is that I am hiring really good people to make these decisions.”