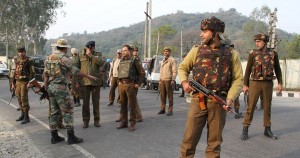 When a militant attack on Nagrota in Jammu unfolded late in November, senior Indian intelligence officials were keeping a close watch on the Indian consulate in Jalalabad, Afghanistan, like reported by scroll.in.

The Army had been provided with intelligence inputs that the Jaish-e-Mohammed, a Pakistan-based terror outfit, had planned simultaneous attacks against Indian targets. According to the intelligence, while one attack was planned on a “high value military target” in the “Jammu region”, the other target was the Indian consulate in Afghanistan.

When India received intelligence of the impending attacks, National Security Advisor Ajit Doval wrote to General Dalbir Singh, then the Army chief, asking him to alert the lower formations in the Jammu region. However, the exact details of the target were not known, and the attack went through. For reasons not known, the attack on the Indian consulate did not take place. However, both threats were a part of a larger and a potent new threat to Indian interests.

The Nagrota attack, as well as the one on the Pathankot Air Force station last January, pointed to a worrying phenomenon never seen in the Indian sub-continent before.

The attacks, and credible intelligence gathered by several countries, show there is a growing working relationship between the Pakistan-based largely Punjabi terror groups, and the Taliban and Islamic State-Khorasan Province based in Afghanistan.

Security analysts feel that one of the main reasons Punjabi-speaking fighters are joining the Taliban or the ranks of the Islamic State-Khorasan Province is to ensure that Pakistan’s external spy agency, the Inter Services Intelligence, continues to have reasonable control over Afghanistan’s various militant outfits and ideologies.

Maulana Masood Azhar, the Pakistan-based founder of the Jaish-e-Mohammed, one of the most potent terror outfits in the region, has been ill for a while, with Indian security agencies getting reports of his deteriorating health for almost a year now.

Azhar came into prominence after he was released by Prime Minister Atal Bihari Vajpayee’s government in exchange for the hostages of the hijacked flight IC 814 in 1999.

Azhar formed the Jaish in Pakistan following his release. Indian security agencies got acquainted with the growing clout of the Jaish after the 2001 attack on Parliament that almost sent India to war with Pakistan.

Recent reports indicate that Azhar is unwell, and possibly dying. He has been battling renal failure for years, and is lodged in the military hospital in Rawalpindi.

In his absence, the bulk of the leadership of the Jaish has fallen on two men – Mufti Abdul Rauf Azghar, Maulana Masood Azhar’s brother, and Qari Zarar, who was first in charge of Pakistan’s Punjab province for the Jaish, and now heads its military wing.

According to at least two Western intelligence sources, Zarar has been keenly involved in building a partnership with Taliban commanders in Afghanistan’s Jalalabad region. Intelligence sources have identified at least four Taliban commanders in Afghanistan who were regularly in touch with the Jaish leadership – Commanders Daood, Salahauddin, Sadiq and Naseer.

Indian investigators got the first hint of the emerging relationship between the Jaish and the Taliban soon after the Pathankot attack. This happened when they chanced upon Kashif Jaan, a Jaish leader who is believed to have planned the attack on the Air Force base. Investigators discovered that Jaan was having conversations with Taliban commanders in Jalalabad, which was confirmed when their Western intelligence counterparts also received inputs that the two groups had several meetings.

The Nagrota attack, which was carried out by five Jaish militants, once again led to suspicions of the Jaish’s links with the Taliban. While three of the Nagrota attackers were killed – identified as Faizan from Sindh, Jawed from Multan and Khalid from Khyber-Pakhtun – the other two are believed to have returned to Pakistan. The investigations would have gone cold but for another major attack that sent intelligence circles buzzing in Afghanistan.

On January 11 a major bomb attack killed five diplomats from the United Arab Emirates among 11 others, and injured its ambassador Juma al-Kabi. The Taliban initially claimed that it was not behind the attack and blamed it on local rivalry. But as intelligence inputs began to emerge from Afghanistan and Pakistan, investigators began to find evidence of the Jaish leadership claiming success for the attack.

The relationship between Afghan militant outfits and Pakistan goes back to the post 1979 Soviet invasion, but much of it had died down after the September 11 attacks in 2001 when the US invaded the country. The Pakistani leadership was asked to either stand down or face the consequences as President George W Bush declared the “Global War on Terror”.

India was almost a marginal player in Afghanistan at that time.

At that time too, if the revelations of David Coleman Headley, one of the men behind the 2008 attack on Mumbai are to be believed, Punjabi terror outfits like the Lashkar-e-Taiba were competing with Afghan groups for funds and recruits.

This seems to have changed now.

As investigators piece through intelligence and evidence coming out of the Kandahar attack, the picture being pieced together is of Pakistan militant groups equipped with better resources and funds due to their tie-ups with Afghanistan-based groups. This raises worries about the emergence of a more potent militancy in India.

This emerging phenomenon is also linked to the cases of missing Indians who are believed to have left the country to join the Islamic State in Syria.

Nearly two years ago, when five men from Hyderabad were caught on the West Bengal border trying to get into Bangladesh, it was revealed that they had signed up to join the Islamic State. However, when their key contact was arrested in Dhaka, he revealed that the five men were headed for Afghanistan, not Syria.

These inputs were the first indications of the role Pakistan was playing in getting Indians into Afghanistan under the aegis of the Islamic State-Khorastan Province.

Similarly, the 22 young men who left Kerala last year ostensibly to join the Islamic State in Syria, are also believed to currently be in Afghanistan, working under the leadership of the Islamic State-Khorastan Province, and could return to India to carry out attacks, believe Indian security officials.

In a complex world, with new relationships between terror groups, New Delhi is facing the prospect of more attacks across India as the Kashmir issue continues to fester.