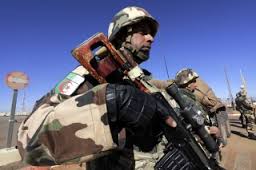 Algeria’s Ministry of National Defense released a statement saying the incident occurred Tuesday morning “during a cordon and combing operation at the village of Ouled H’mida, located in Baghlia,” a town in the northern province of Boumerdès.

While much of Algeria is considered relatively secure, militant groups are known to enjoy safe havens in the north of the country, where they have clashed with security forces in multiple incidents throughout the year.

Al-Qaida in the Lands of the Islamic Maghreb is an Algeria-based Sunni Muslim jihadist group that, according to the U.S. National Counter-Terrorism Center, employs “conventional terrorist tactics, including guerrilla-style ambushes, mortar, rocket, and [Improvised Explosive Device] attacks.”

Militants from the IS affiliate in October 2014 kidnapped and beheaded 55-year-old Frenchman Hervé Gourdel in Algeria, depicting the execution in an online video. The militants said France had failed to respond to a demand to drop out of the U.S.-led coalition against IS forces in Iraq and Syria.