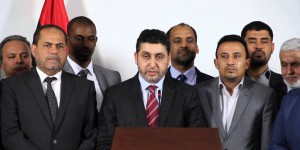 Self-proclaimed authorities of Libya’s capital Tripoli announced Friday a state of emergency in Tripoli following reports about the arrival of members of the UN-backed presidential council to Tripoli.

“The state of emergency shall be declared across the country. The cabinet is in permanent session,” it said.

Khalifa Ghwel, Tripoli’s prime minister, said that he asked security agencies and armed militias “to take all necessary actions to preserve the security of the country by increasing security patrols and checkpoints.”

Feyez Serraj, prime minister of the Tunis-based UN-sponsored government and head of the presidential council, has revealed that the new government will move to the capital “in a few days” according to a plan with Tripoli’s security agencies and armed groups.

Serraj’s unity government has been named based on a peace deal signed by Libya’s political rivals.

However, the new government has been rejected by both rival authorities.

Ghwel’s government has rejected the UN-backed government, saying in a statement that “a government imposed by the outside and without the consensus of Libyans has no place among us.”

Also, the internationally recognized authorities in eastern Libya warned against “imposing the unity government” without prior approval of the House of Representatives (parliament).

Libya suffers a political division with two rival parliaments and governments battling for legitimacy. The country has been struggling to make a democratic transition since the fall of Muammar Gaddafi’s regime in 2011.