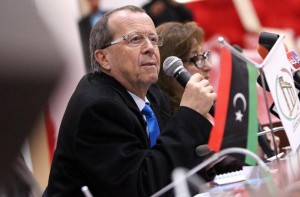 He further stated that the MPs who have signed the agreement represent ‘’only themselves’’.

After a meeting between the UN envoy to Libya Martin Kobler and Tripoli Parliament members in Tripoli, Abd Al-Sadeq said that ‘’substantial amendments’’ needed to be implemented before the General National Congress could reach a decision on the Agreement.

Kobler has maintained that political negotiations are the way forward, urging both sides to work within the framework of the UN.

Kobler added in a press conference on Sunday that maintaining political life in Libya would be contingent on the following; the implementation of the LPA, the facilitation of UN work In Libya, the inclusion of all the parties in negotiations, a peaceful transfer of power, and Libyan sovereignty.

“The Libyan people are pushing for the finalization of the agreement due to high prices, lack of security and the threat of terrorism,” said Kobler.

Kobler said the aim of his visit was to garner support for the agreement and added that he hopes to do the same in future visits to Libya.

Welcoming the words of Nouri Abu Sahmain, Tripoli Parliament Speaker, to facilitate UNSMIL redeployment to Tripoli, Kobler said: “We need to be back in Libya, among and with Libyan people”.

Abu Sahmai, however, has rejected the National Unity government formed by the agreement signed by some members of both Libyan Parliaments and both parliaments have insisted that members who have signed represent ‘’only themselves’’.

Abu Sahmain added that “to establish any political agreement, all parties must be included in any talks”.

Kobler has also been in talks regarding the Agreement with Tobruq Parliament Speaker Ageela Salah.