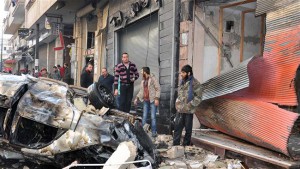 Islamic State suicide bombers killed at least ten people and injured dozens in two coordinated attacks on Tuesday in the heart of the northeastern city of Hasaka in Syrian Kurdistan, a monitor and a resident said.

The first explosion targeted a position of the Kurdish Security Forces, Asayish, near the Sinalco roundabout in northern Hasaka, leaving big property losses, according to the UK-based Syrian Observatory for Human Rights.

The bomber blew himself up in the Kurdish portion of the city at a police station run by the Kurdish Peoples Protection Units (YPG).

The second car bomb, the Observatory said, tore through an old hospital building, which is being used as a position for the Syrian government forces, near the Kahraba roundabout south of Hasaka, leaving tens of civilians wounded.

The Kurds in Hasaka have a large community in the northern and northwestern parts of that city.

The ethnically-mixed city is divided into separate zones run by the government of Syrian President Bashar al-Assad and a Kurdish administration with a well-organized militia.

Last Sunday an Islamic State suicide bomb attack on the Kurdish city of Qamishlo in Syrian Kurdistan killing at least one and wounding several others.

The Observatory, which tracks violence across the war-torn country, said both the Kurds and the Syrian authorities were keeping a tight lid on the numbers of casualties.

A resident of Hasaka contacted by Reuters said the Kurds and Syrian forces cordoned off the main arteries within the city after the explosions.

Syria’s state news agency SANA confirmed that two explosive-laden cars were detonated in twin bombings near a main roundabout in the city and close to a children’s hospital, but gave no details.

Earlier this month, the ultra-hardline Islamic State militants were repelled by the Syrian army after they made lightning advances south of the strategically located city by conducting around a dozen suicide attacks using explosives-filled trucks at military checkpoints there.

Meanwhile the Kurdish forces in Syrian Kurdistan said they had seized a town from Islamic State (IS) in the jihadists’ stronghold of Raqqa province on Tuesday, pressing an offensive backed by U.S.-led air strikes.

Redur Xelil, spokesman for the Kurdish Popular Protection Units (YPG), said Ain Issa was under “Total control”, together with dozens of nearby villages. Ain Issa is 50 km (30 miles) to the north of Islamic State’s de facto capital of Raqqa city.

The People YPG captured the town of Girê Spî (Tel Abyad) on the Turkish border last week, cutting a major supply line for IS.