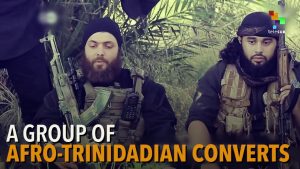 Trinidadian nationals are among women and children from 12 territories who surrendered with Islamic State (Isis) fighters to Iraqi authorities in late August, a recent Human Rights Watch report has stated, like reported by guardian.co.tt.

UNC MP Rodney Charles caused an uproar from Government in yesterday’s Budget debate in Parliament when he alluded to the discovery of the TT nationals being held abroad and his refusal to disclose the source of his information.

After debate yesterday, Attorney General Faris Al-Rawi who was asked about T&T families who went overseas to join Isis in recent years, confirmed, “We have a number of matters that are on track with several of our foreign partners. We’ll report on these as and when we’re in a position to.”

Charles raised the issue of T&T terrorist fighters overseas during the debate and added T&T citizens — women and children — were recently captured in Iraq.

He didn’t immediately give the source of that information saying he didn’t have it. Government MPs protested. Charles subsequently produced the source and Deputy Speaker Esmond Forde allowed him to state it.

But Charles was hit by Government roars when he attempted to give the information. Opposition MPs shouted back.

Al-Rawi told T&T Guardian that Government was tracking the families. He said Charles was reckless to quote information without the source.

“Also, there’s a penchant from the international community to push out information that’s unverified, to tarnish our information. This form of reckless communication from the UNC constantly lands in international papers, tarnishing our reputation,” he said.

Al-Rawi said until National Security and international partners deal with the matter “in an evidential way, there’ll be no ole talk on this. The reason T&T survived international scrutiny is because it was taken in a strict way.”

The Human Rights Watch report, which was compiled last month, by Bill Van Esveld states Iraqi authorities are holding 1,400 foreign women and their children who surrendered with Isis fighters in late August, fleeing a military offensive that re-took a town from Isis. They were placed at a detention site, north of Mosul.

The human rights group which visited the camp on September 10 – 11, stated, “The women and international humanitarian staff there said they include Afghan, Azerbaijani, Chinese, Chechen, Iranian, Russian, Syrian, Tajik, Trinidadian and Turkish nationals. Reuters reported they also include Algerian, French and German nationals.”

Reuters was told the Iraqi army was holding the women and children “under tight security measures” while awaiting orders how to deal with them — including women described as being “deluded by vicious Isis propaganda.”

The report stated on September 16, Iraqi Prime Minister Haider al-Abadi said most of the women and children weren’t guilty of a crime and his Government was in “full communication” with their home countries to “find a way to hand them over.”