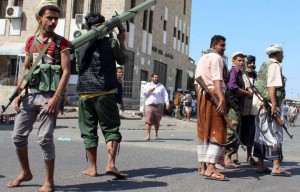 A senior military official told Xinhua that hundreds of tribal fighters launched an all-out offensive against Houthi gunmen in the southern province of al-Dhalea and regained control over the province after defeating the Houthis on the ground.

“The pro-Hadi tribal militia killed more than 18 Houthi gunmen during the massive offensive that lasted three days and retook full control of the province as well as some surrounding areas,” the Yemeni military source said on condition of anonymity.

Several field commanders of the Shiite Houthi group were killed during the battles in al-Dhalea province, the source said.

The fighting continued Tuesday in al-Dhalea’s outskirts that left about five pro-Hadi fighters killed and more than 30 injured, according to local medics.

A source close to the Houthi group said that the group’s leaders sent reinforcements and additional armored vehicles to regain control over the military sites that they lost in al-Dhalea province during the past two days.

Intensified Saudi-led airstrikes on Tuesday hit targets of the Houthis in Yemen’s southern port city of Aden, destroying many buildings.

An army commander said that more than 10 rounds of the airstrikes bombed Houthi-manned checkpoints in Aden’s northern entrance of Dear Saad district. He did not give the casualties.

Saudi Arabia, along with eight other Arab states, have been bombing the Houthi group and forces loyal to former president Saleh since March 26, aiming to reinstate the government of Hadi, who was forced to flee the country.

The death toll from the battles between Houthis and Hadi’s supporters, as well as the airstrikes, have exceeded 1,500, while more than 4,000 people were wounded across the country, according to statistics released by the Yemeni government.