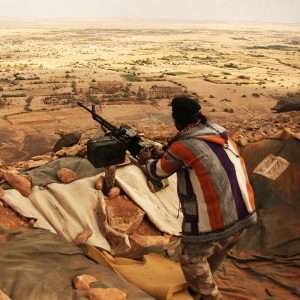 Retaliatory tribal fighting killed three people on Sunday in the southern Libyan city of Sabha, a source of the Security Directorate of Sabha told Xinhua.

“Three people were killed as a result of reprisals between the Awlad Sulaiman and Tabu tribes, which led to a security tension in some neighborhoods of the city,” the source said.

A Tabu checkpoint was set up on Sunday morning after unidentified gunmen opened fire at a cafe in a Tabu neighborhood on Saturday. When a military commander named Madi Omar of Awlad Sulaiman origin passed the checkpoint, he was shot and killed immediately after refusing to stop, the source explained.

“After that, Awlad Sulaiman gunmen killed a person from Tabu in retaliation for killing the military commander. Then, Tabu gunmen raided a nearby shop and asked the owner to show them a surveillance camera footage to identify the killer. The owner refused, so they killed him immediately and burned his shop,” the source added.

Two security personnel were killed and a third was wounded earlier Sunday when unidentified gunmen attacked the security headquarters in the city.

Libya has been plagued by insecurity and a political chaos since the overthrow of Muammar Gaddafi’s regime in 2011.