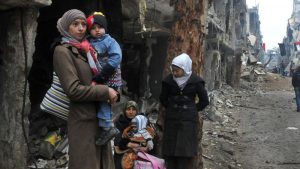 For 100-year-old Tamam Shaheen, the day Islamic State militants took over her village was not particularly memorable, like reported by voanews.com .

“One night Free Syrian Army rebels were occupying our village and the next day it just changed,” she said, sitting on the concrete floor of a one-room house with an unlit cigarette in her hand. “All those bearded people were here.”

During their rule over her village, Sarran, IS militants ruined the local economy and forced villagers to adhere to dress codes. They tried, unsuccessfully, to enforce a strict no-smoking policy, but none of this impacted Shaheen’s life greatly.

But even the most benign corners of formerly IS-held territory were not spared personal tragedies. Shaheen’s grandson is now imprisoned amid the post-IS chaos, accused of fighting with the militant group.

“Militants ordered me to wear a veil on my face,” she said. “But I rebuked them. I told them ‘It is not your job to tell me what to wear!’”

Authorities holding 22-year-old Abdulrahman now, she said, are not so easy to rebuke.

In other parts of IS-controlled Syria and Iraq, IS beat husbands and fathers of women who refused to cover their faces. Locals have been imprisoned or even killed for smoking cigarettes.

Militants are now fighting to the death in the nearest large city, Raqqa, 60 kilometers away, but eight months ago in Sarran, IS just left.

Around the same time, Abudulrahman was returning to the village when he was arrested, according to his mother, Wahda Mustafa. The family and neighbors say he is disabled from a car accident and may have accidentally agreed he was guilty of crimes he didn’t commit.

“My son was coming home from Raqqa but the roads were blocked,” said Wahda Mustafa. “They picked him up at a checkpoint, but I don’t know why.”

During the course of Shaheen’s 100 years, Sarran’s population grew from about four families to roughly 700 people. As IS is slowly being defeated in the region, the village is growing again.

Across a brown field of dust, displaced families from Raqqa crowd into a schoolhouse. Refugee camps in the area are notoriously short of food, clean water and medicine, baking in the desert in the hot summer sun.

But families say they pay a high price for the small comforts of settling in a village rather than a camp after fleeing IS. The displaced Raqqa residents are noticeably more conservative than the villagers, with the women remaining secluded inside, while local women in colorful dresses cook and smoke cigarettes in public.

Raqqa families are shunned and often presumed to be IS supporters, despite multiple investigations concluding they are innocent, according to Khalid Abdullah, 40, a former oil worker from Raqqa and a father of 11.

“I saw beheadings and hands cut off in the city,” he said under an awning near the school. “It was raining mortars when we ran away. But still, they call my son ‘IS’ when he goes out.”

The more lasting tragedies touching the lives of the people of Sarran come not from IS extremism, but from ordinary corruption. Before the war, the Syrian government had mandated that wealthy landowners in the area dole out portions of their fields to local farmers.

The farmers survived by working the land and reaping the profits. Under IS, bribes were paid and profits from the land reverted back to the rich, according to Ayman Kalaf, 19, one of Shaheen’s many grandsons.

Surrounded by other farmers, who nodded in agreement as he spoke, Kalaf described how under IS, his poor village became even poorer and families are still struggling to recover.

“Long ago this area was under a feudal system, with all of the valuable farms owned by the rich,” he said. “But modern governments required owners to divide some of their lands among local farmers. When IS came in, they gave the land back to the rich.”

And while their suffering may not be as dramatic or even traumatic as the suffering of families living under siege or hunted and sometimes slaughtered by IS, villagers say they already lived on the edge of survival in the best of times, and they barely made it through their time under IS.

“I have to take care of my house and children, and I work as a farmer,” said Umm Mohammad, a local women’s activist. “We build our own houses with bricks we make from the earth. Life here is hard.”