You are here: Home / Africa / Town in central Mali falls under jihadist control

The central Malian town of Boni was under jihadist control on Friday after administrative buildings were attacked and the army was driven from the area, an elected official and a security source told AFP 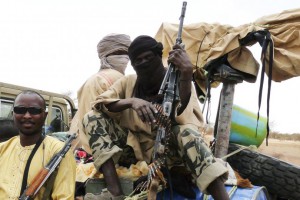 “At the moment jihadists are in control of the town of Boni. They infiltrated the town and today fired on several buildings,” said the official, who requested anonymity, adding “the army is no longer there.”

Boni is home to several thousand people and at nightfall remained under the control of the unidentified armed group who fired on administrative buildings and burnt down the mayor’s office.

“We asked our forces present in Boni to withdraw to the locality of Douentza, which has been done,” a military source told AFP, also asking not to be named as the Malian army has refused to comment on the incident.

Douentza is around 90 kilometres (56 miles) from Boni.

Ongoing international military intervention since January 2013 has driven Islamist fighters away from major urban centres, but large tracts of Mali are still not controlled by domestic or foreign troops.

Jihadist groups early last year began to carry out attacks in central Mali as well as the long-troubled north.