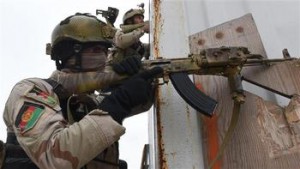 Afghan officials say a senior commander of the Taliban militant group has been killed along with three of his comrades during an operation in Afghanistan’s western province of Herat.

General Mohammad Juma Adil, a commander of border police forces in western Afghanistan, said Mullah Mir Ahmad was killed along with three others when Afghan security forces launched a surprise attack on them in Ghoryan district of the province early on Saturday.

Adil added that the death of the Taliban commander would be a major setback for Taliban militants operating inside Herat and adjacent provinces.

Meanwhile, at least 15 Taliban militants were killed during clashes with Afghan security forces in the northern Kunduz province.

Nusrati added that two Taliban commanders, identified as Qari Rahimuddin and Mullah Tufan, were among the slain militants, noting that two Afghan police officers also lost their lives in the fighting.

Additionally, at least five civilians, among them four women, were killed and 11 others wounded when a rocket fired by suspected Taliban militants struck their house in the eastern Laghman province.

The provincial governor’s office said in a statement on Saturday that the incident took place in the Alingar district of the province on Friday night, and those injured have been shifted to nearby hospitals to receive medical treatment.

No individual or militant group has claimed responsibility for the act of violence.

On April 12, the United Nations Assistance Mission in Afghanistan (UNAMA) released a report showing a rise in civilian deaths amid clashes between Taliban militants and Afghan government forces.

According to the UNAMA report, over 136 civilians were killed and more than 521 injured in the first quarter of the year.