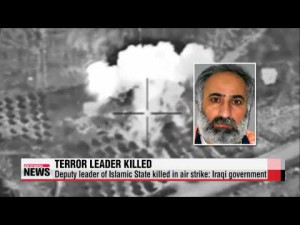 Iraq said Wednesday that a strike by the US-led coalition targeted top Islamic State leaders, including a man presented as the second-in-command, but the US military cast doubt on the claim.”Based on accurate intelligence, an air strike was carried out by the international coalition targeting the number two in the Daesh terrorist organization Abu Alaa al-Afari,” the ministry of defense said in a statement.Daesh is an Arabic acronym for the Islamic State militant organization, which took over swathes of Iraq last year.It was not clear from the statement whether Afari was killed in the strike, which the ministry said targeted a gathering in the Martyrs’ Mosque in Tal Afar’s Al-Ayadiya district.Reacting to reports that Afari had been killed, the US Central Command overseeing the air war against the IS group, said it had “no information to corroborate these claims.”

“However, we can confirm that coalition aircraft did not strike a mosque as some of the press reporting has alleged,” it said in a statement.The Iraqi defense statement did not say when the raid was conducted but came with a video of the alleged hit — grainy black and white aerial footage of a building being destroyed in an apparently scarcely populated area.Afari’s name emerged last month in reports claiming that IS head Abu Bakr al-Baghdadi was incapacitated in a coalition strike and handed over the helm of the organization to Afari.The Pentagon however had said at the time there was no reason to think Baghdadi had been wounded.

The structure of the organization’s senior leadership is secretive and IS has only released video or audio recordings of Baghdadi or the group’s official spokesman Abu Mohammed al-Adnani.The defense ministry Wednesday also said the strike targeted the top IS judge in the group’s self-proclaimed Jazira province, which includes Tal Afar, and “a large number” of the organization’s members.Tal Afar lies near the border with Syria, almost 250 miles northwest of Baghdad, and was one of the first places IS fighters took over when they launched a surprise offensive on June 9 last year.The US State Department last month put a $7 million bounty on information leading to Afari, who is presented on the Rewards for Justice website under the name of Abd al-Rahman Mustafa al-Qaduli.

The US-led coalition has been launching attacks on the Islamic State group in Iraq since June 2014. While the group reportedly lost around 25-30 percent of territory they had gained in the area by April 2015, US-led airstrikes in both Iraq and neighboring Syria have been criticized by rights groups for killing civilians.